Trinity Sunday: Is it Relevant? 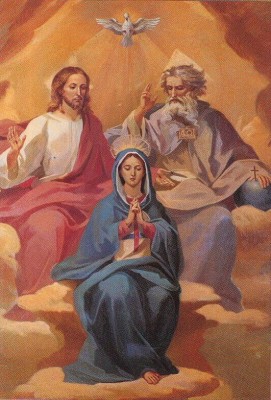 Many are ready to give a polite nod of some sort to Jesus of Nazareth. Most honor him as a great moral teacher. Many even confess him as Savior. But the Incarnation of the Eternal God? Second person of the Holy Trinity? God can’t be one and three at the same time. Such a notion is at worst illogical, at best meaningless. “This was all invented by the Roman Emperor Constantine in 313 AD,” scoff a motley crew ranging from the Jehovah’s Witnesses to the DaVinci Code.

Of course this charge has no historical leg to stand on. St. Ignatius of Antioch wrote seven brief letters around 110AD in which he called Jesus “God” 16 times.

True, the word “Trinity” is not in the bible. But everywhere the New Testament refers to three distinct persons who seem to be equally divine, yet one (see 2 Cor 13:13). So over 100 years before Constantine, a Christian writer named Tertullian coined the term “Trinity” as a handy way to refer to this reality of three distinct, equal persons in one God. It stuck.

But if the doctrine of the Trinity is authentically biblical, is it relevant? Does it really matter?

If Christianity were simply a religion of keeping the law, the inner life of the lawgiver would not matter. But if Christianity is about personal relationship with God, then who God really is matters totally. Common sense tells us that some supreme being made the universe and that we owe Him homage. But that this creator is a trinity of persons who invites us to intimate friendship with Himself, we never could have guessed. We only know it because God has revealed it.

God is love, says 1 John 4:8 (see too John 3:16). If God were solitary, how could he have been love before he created the world? Who would there have been to love? Jesus reveals a God who is eternally a community of three persons pouring themselves out in love for one another. The Father does not create the Son and then, with the Son, create the Spirit. No, the Father eternally generates the Son. And with and through the Son, this Father eternally “breathes” the Spirit as a sort of personalized sigh of love. “As it was in the beginning, is now and ever shall be.” That’s what the conclusion of the Glory Be really means, that the self-giving of the three divine persons did not begin at a moment in time, but was, is, and is to come.

If we are truly to “know” our God, we must know this.

But if we are ever to understand ourselves, we must also know this. For we were made in the image and likeness of God, and God is a community of self-donating love. That means that we can never be happy isolated from others, protecting ourselves from others, holding ourselves back selfishly from others. Unless we give ourselves in love, we can never be fully human. And unless we participate in the life of God’s people, we can never be truly Christian either. Because Christianity is about building up the community of divine love which is called the Church. If God is Trinity, then there really is no place for free-lance, lone-ranger Christians.

The family, the domestic Church, is a reflection of trinitarian love – the love of husband and wife, distinct and very different persons, generates the child who is from them but is nonetheless distinct from them, indeed absolutely unique.

And that is the final point. One of the greatest treasures of Western culture is the concept of the uniqueness and dignity of the individual person. You really don’t find this idea in the ancient societies of Greece and Rome or in other great world religions, such as Islam.

The concept of the irreplaceable uniqueness of each person came into Western culture straight from the doctrine of the Trinity, three who possess the exact same divine nature but who are yet irreplaceably unique in their personhood.

The irony? As it progressively abandons the triune God, the Western world is undermining the very foundation of personal dignity, individuality, and freedom.

So yes, the Trinity does matter.

Reflection for Good Friday: The Victory of the Cross
Read
Sharing in Christ's Anointing: A Reflection for the Baptism of the Lord
Read
Ignorance of Scripture is Ignorance of Christ - Third Sunday in Ordinary Time
Read