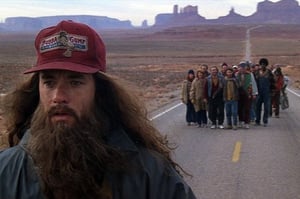 A few years ago, in the blink of an eye, my dad was killed while working in his backyard. A section of a big old tree fell and crushed him. Really, it was a horrific way to die. And while the reality of his death was very hard on my mom, siblings and me, the outpouring of support from friends, extended family, coworkers and mere acquaintances of my father’s at his wake and funeral Mass was a testimony to how well he lived.

His death pushed me, forced me, to begin asking some tough questions of myself. The big one was, If I died tomorrow, what’s my biggest regret? I immediately knew the answer.

If you’ve seen the great motion picture Forrest Gump, you probably remember the scene when, after running across the United States for 3 years, 2 months, 14 days, and 16 hours, Forrest suddenly stops running, turns around to the paparazzi following him and says, “I’m pretty tired. . . I think I’ll go home now.” Right there, in the middle of Monument Valley, Utah, Forrest simply quit running.

My conversion begins a little something like that. Well, not really. Even though I’m a wannabe runner, there’s certainly no way on God’s green earth that I could run cross-country like Forrest Gump. But my story begins the day I quit running … or quit working rather … as an assistant city manager in the Des Moines metro area. A lucrative job, everyone told me how blessed I was to have landed it at such a young age, even more so as a young woman. Indeed, I was blessed. And I greatly enjoyed the work, even though I was perpetually exhausted and miserable by the fast pace it required.

I was the first point of contact for many wanting to engage with the city — from news media wanting to break a major story to Mrs. Jane Doe who simply wanted a block party permit. My primary responsibility was to engage with others to build community. But building community for others began to take a toll on my family and me. The Das Schmidt Haus community needed to be built up as well and was in desperate need of my TLC. One evening as I was brushing my teeth and getting ready for bed, weary and tired from running the race associated with my job, I heard (maybe felt is a better way to describe it), I felt God whisper to me:

It’s time to stay home and be a mommy. Say yes. And just wait and see what I have in store for you!

Now some may call me crazy, that it really wasn’t God’s voice I was hearing, but I wasn’t taking any chances. If it was God speaking, (it was) I certainly wasn’t going to disobey Him. And so came my Forrest Gump moment where I simply stopped dead in my tracks, looked the city’s mayor in the eye, and said:

My answer to the question If I died tomorrow, what’s my biggest regret was: Denying my husband his wife, denying my children their mother, and denying myself an opportunity to fulfill my vocational call. It took my dad’s shocking death for it all to sink in. The decision didn’t make sense to most people, but it was and is the right one. When you go against conventional secular “wisdom,” you’re going to get some confused looks. Forrest may not have heard a call from Christ, but he was following a sense of higher purpose. The paparazzi following him didn’t understand why he stopped running, either.

Have you had a Forrest Gump stop-in-your-tracks kind of moment? Did it involve saying no to something so that you could say yes to a higher calling? I would love to hear from you, especially “retired” career moms who have come home.

(This column originally appeared 4/6/13 at ThePracticingCatholic.com)