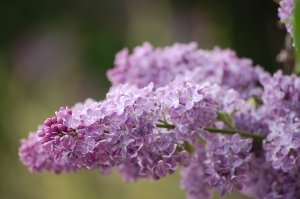 As I write this, the lilacs are in bloom here in Michigan in all different shades of lavender and white. They smell heavenly. They look like purple candy. I've always loved the smell of lilacs, and every spring when I see and smell them, I am reminded of a story from my childhood.

I was a girl of about eleven or so when my best friend Jenny and I discovered a wooded area near our houses with the largest lilac bushes imaginable. And more than one bush; there were several that were absolutely covered in lilacs from top to bottom. We couldn't believe our luck when we came across them, and in our youthful innocence, decided to bring some home to our mothers as a little present. We tried to snap off a few but realized that we needed scissors of some type. I had remembered seeing some clippers in our garage. We ran back to my house, retrieved the clippers, and hurried back to the bushes, eager to create lovely bouquets for our mothers. It was a beautiful spring day, and upon arriving back at the lilacs, we took in their sweet, floral scent. Happily, we snipped a few clips here and there and headed home with our treasures. My mother put hers in a little bud vase in our bathroom. She was absolutely delighted to receive them. She kept talking about how beautiful they smelled, and wondered where we had gotten them. The flowers made her very happy, which in turn made me very happy.

I told her about the wooded area by our neighborhood. In those days, kids would roam free for hours, so unlike today when parents barely let their children out of their sight for more than a few minutes. We had no cell phones for our parents to keep track of us, and you just sort of knew when dinnertime was, since it was the same time every day, when the sun looked a certain way in the sky. My brother's friend would come home at the sound of a long, sharp whistle his dad would make around 6:00. Whenever you heard that whistle emanating through the streets, you knew it was time for John to go home for dinner. You didn't think anything of it; it was dinnertime at John's house.

Naturally, Jenny and I went back to the lilac bushes when the lilacs in our houses started to wilt after a couple of days, clippers in hand, to snip off a few more branches.

We arrived at the bushes and found ourselves face to face with an angry woman, hands on her hips.

"SO," she said angrily. "You're the ones who have been cutting my lilacs!"

We stood there in shock. I froze, clippers in hand, and glanced at the enormous bushes, so full of lilacs, enough for dozens of little girls to take home to their mothers. We had barely made a dent in the bushes, but apparently she had noticed some missing.

"I didn't know they belonged to anybody," I said, my lip trembling. "We thought they were wild." I was very sensitive and could cry at the drop of a hat. Having this strange woman being angry at us was more than I could take.

"Well, they're not wild; they are MY bushes," she said, "and I don't want anyone clipping them! Now go on home."

Jenny and I walked away, dejected. Apparently we had stolen the lilacs, and we didn't even realize it.

"We stole them," I said, unbelieving it. "I thought they were wild," I repeated.

This was a lot to take in. We were thieves, apparently. Lilac thieves. It was sad after that, because we had no more lilacs to smell in our homes. Neither of us had lilac bushes growing in our yards. Jenny's mother grew swiss chard and zucchini, and my mother grew tomatoes and geraniums. None of those plants had the sweet, intoxicating smell as the lilacs.

Jenny and I both agreed that the lady was really mean for yelling at us like that.

"She has so many!" I wailed to my mom afterward. "What is she going to do with all of those lilacs? She can't possibly use them all!" No more little lilac bouquets for the bud vases. It was so sad.

"But she should share!" I said. "Why can't she share them with people? We didn't even cut from the front of the bush; we cut from the back where nobody can even see them!"

It was a tough lesson in sharing—or lack thereof. I was used to generous people in my little world. Family was generous and gave of themselves. Friends were generous as well. Our neighbors were generous, letting us cut through their yards on our way to friends' houses. We were generous with others in return. But you can't force people to share. Not that I would want to. There's something very wrong with forcing people to share.

To this day, whenever I see lilacs, I am taken back to that spring day when that lady would not share. It was her right not to, of course. They were her lilac bushes. I still think that it would have been nice of her to snip a few for us, in a gesture of springtime goodwill. How we would have remembered that about her!

And what if she would have told us how old the bushes were, how to take care of them, how many varieties of lilacs there are, what kind of birds are attracted to lilac bushes? That would have been such a pleasant memory. And what if she would have said, "You know, I don't mind you girls taking a few, but please ask first, okay?" That would have been such a lovely memory. Instead, I think of her yelling at us to leave. What an opportunity she missed, to have shown compassion. There are people with so much who give so little. There are also people who have so little who give so much. And then there are the people in between.

I read a story of a chef who recently won a $10,000 prize in a cooking contest. His opponent was trying to win the money so she could visit her beloved dying grandmother in France, to see her one last time. He and his wife had bills to pay, so when he won the prize, he was ecstatic.

"What are you going to do with the prize money?" they asked him.

He smiled and asked for his opponent to come back out on the stage. He offered her enough of his share so that she could buy an airline ticket to see her dying grandmother, which she did gratefully. I was really taken by this show of Christlike compassion. It was a beautiful thing to do.

This is true sharing: sharing when we don't have to, want to, or when it is not expected of us. It is not easy to do; I realize that. It is not easy to follow Christ, to love like He does. After all, He shares everything: He shares and gives us Himself in His Body, Blood, Soul, and Divinity.

There are some days we want to keep all of the lilacs, all of the prize money, for ourselves. But what happens when we hoard God's gifts? I always wondered what that woman did with all of those many, many lilacs. I am sure most of them just died off naturally, giving joy to no one else but her.

Yes, had we known the lilac bushes belonged to someone, we would have asked first. You don't just go clipping flowers from people's property.

But it sure would have been nice—and so Christlike—if that lady would have shared her abundance with us.