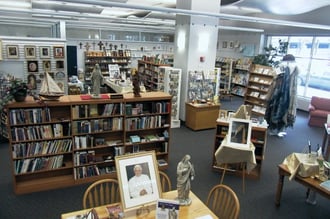 When Pope John Paul encouraged us to become part of the “New Evangelization” Catholic bookstore owners were ready.  They had already been evangelizing.  After all, no one gets into such a business for the money. They do it for treasures not of this world.

“I need an ordination card,” a female customer told Phyllis Nentwich, owner of Generations Religious Gifts and Church Supply in Columbus, Ohio. “It’s for my friend. Her son is going to be a priest in four years.”  It seemed a bit early for such a card, but then the lady continued. “My friend is dying, so she won’t be there on his ordination day.”

Phyllis took her over to the card section. “Together, we read ordination cards and shed a tear or two imagining the moment that the newly ordained priest read the card from his Mother four years after her death.”

The very next customer was a young woman. “Can I have a holy card custom made for a funeral?” she asked.

“Of course,” Phyllis replied, sensing the loss was personal.

“I gave birth four days ago to twins,” the women said quietly. “They did not live.”

“Oh, I am sorry,” Phyllis said gently.  She helped the mother select holy card pictures and then turned to the Mother’s Manual, to comfort her; finding a selection of prayers for mothers with children in heaven. The grieving mother then selected three guardian angel coins; one for each of her living children as a remembrance of the angel sisters they now have in heaven.”

According to Phyllis, those were not sales that will keep their doors open but they were sales that demonstrated that Catholic books stores are not just about business. “I do not want to be remembered because I sold a book or a bracelet or a candle, I want to be remembered because I made a difference in someone’s life in just a small way,” she said.

Phyllis and her husband Larry—a pediatric nurse and a man who sold church candles—became marriage partners and business partners. He runs a tight ship and she is ever the nurse, teaching and comforting souls who walk through their doors.

In this world of online purchases and mega stores, the independent books stores seem threatened for extinction. Indeed, The death toll is rising. During the last two decades, independent bookstores have dwindled from 4,000 to about 1,900 in the United States. And even the biggest chain stores that once cozied up to the small independent stores, cutting off their customer support, have felt the pinch of online buying.  Although, “pinch” is too mild a term for B. Dalton Books and Crown Books that went out of business years ago while Border Books gasped mightily until closing the doors of their last remaining stores on Sunday, September 18, 2011.

Now, only Barnes and Noble, remains alone in the big chain stores. But they too are fighting to survive in the online age with Amazon as enemy number one, offering discounts and easy shopping. The introduction of Kindle and e-books has brought yet another challenge to B & N and independent stores alike, where stocking inventory is more expensive and labor intensive than sending a book through the internet.

If one only looked at the numbers and buying trends, it would seem Catholic stores are doomed. But if variables such as faith, prayer, and ministry are added in, then they have the tools to overcome. Catholic bookstore owners possess characteristics superior to digital service and share a common trait:  a deep love for their faith. Selling books and gifts is secondary to loving God, their faith and their fellow man. You cannot get that online.

The Catholic bookstores provide a dramatic alternative. For instance, this past summer, Amazon founder and CEO, Jeff Bezos, donated $2.5 million to support same-sex marriage in Washington State. And Amazon carries most anything that will sell with no regard for Christian morals.  The inventory and owner  of a Catholic store are less likely to undermine Catholic teaching. The bonus is doing business with someone who cares about our faith and about you.

Laura Smith, co-owner with Terri O'Connell of Abundant Graces bookstore in Bethlehem, PA, recalled a customer who entered her store several years ago.  She was frail, in her late fifties and on oxygen.  Her daughter, in her early thirties seemed to be overly helpful to the point of agitating the older woman. “I stepped in to help and told the daughter to look around, that I would look after her mom for her,” said Laura.  She brought a chair for the lady then brought items to her.  “When her daughter was out of ear range, Mom whispered...I have cancer, my daughter doesn't want me to know how bad I am.  I am here to buy a special gift for her for all she is doing for me, and something for her two brothers.”

The lady picked out two beautiful rosaries for her sons and a few items for her daughter. Every time her daughter came near, the lady hid the gifts, and shooed her away.  “We laughed, we cried, and she struggled to breath so we prayed,” Laura recalled. “When they left, I was reassured I was working in the right place, I was thankful that God brought my business partner and I together and that we were able to open His store.”

A month later came a note, "Thank you to your staff person that took the time to make my mom so comfortable in her final days of life. Her trip to your store was the last time she was able to get out of the house….I saw and heard my mom as she was in the past, joking around, laughing, and telling me what to do, thank you for the gift you gave both her and me.”

Ann Strozzo and Ann Marie Rowe have written a book From Hysterical to Holy about their fifteen years operating The Catholic Shoppe (sold and now St. Anthony’s bookstore in Spartan, SC.)  A favorite story of theirs was when an older gentleman came halfway through the door. “Psss!” he said and motioned for someone to come over. “Could you help me? I’m a Baptist and my favorite song is the Ave Maria. Can you tell me what it means?”

“Now this is scriptural,” Ann Rowe began. “Hail Mary full of grace, the Lord is with you, blessed are you among women, and blessed is the fruit of they womb Jesus.” And he started to cry.

She handed him a holy card with a picture of the Blessed Mother on it. “Holy Mary Mother of God, pray for us sinners now and at the hour of our death, Amen,” she finished. He put the card in his wallet and said, “I’ll carry this with me until I die. Thank you.”  They never saw him again but trusted he was lovingly in the arms of the Blessed Mother.

For many years, Catholic bookstore owners had to go it alone.  Alan Napleton, founder of the Catholic Marketing Network , changed that. He left the corporate world over twenty years ago with the desire to serve the Church. While running a small video production company that distributed to bookstores, he was surprised at how unconnected the Catholic marketplace was.  He founded the Catholic Marketing Network as a way to support both stores and suppliers by bringing them together and offering support including an annual trade show. The shows have been hosted all over the country and are part networking and part retreat with Mass and talks by priests and Catholic speakers.

“Catholic Bookstores are real outposts of evangelization and provide an invaluable service for the Church,” said Napleton.  “These operators are primarily mission driven and spend countless hours helping their customers  individual needs with little if any financial compensation.” He lamented that most are struggling financially and encouraged Catholics to support them.

Although buying with the click of the mouse is easy, supporting a Catholic evangelist is better. With the holidays coming, shopping at a Catholic books store would be a gift to the owner and to you—a far richer experience than the alternatives.