Pray for Me: The Life and Spiritual Vision of Pope Francis 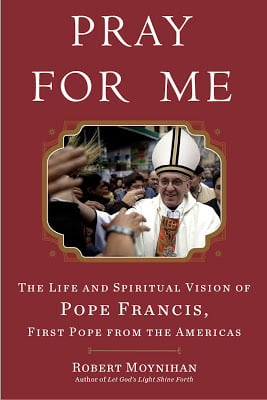 Pray for Me by Dr. Robert Moynihan

Pray for Me: The Life and Spiritual Vision of Pope Francis, First Pope from the Americas
by Dr. Robert Moynihan
New York: Image, 2013

Pray for Me: The Life and Spiritual Vision of Pope Francis, First Pope from the Americas, was published a mere six weeks after the election of Pope Francis. As a writer, I can only imagine what a monumental task that must have been for Dr. Robert Moynihan, but the founder and editor of Inside the Vatican widely known as one of the world’s leading Vatican analysts was clearly up to the challenge.

The title of this ambitious work, Pray for Me, comes from the “first request made by this pope to all of us, a simple request, from his heart: ‘Pray for Me.’” The purpose of the book is to answer three questions – Who is this man? What does he believe? and What will he do as leader of the Church?

Moynihan answers the first two questions by offering a short biography and exploration of Pope Francis’ primary spiritual influences.  The portrait that develops is one of a very human man whose life took him in various directions. Perhaps one of the most charming anecdotes was of the future pope at age twelve, writing a love letter to a young girl telling her if she didn’t marry him he would become a priest! He studied chemistry and then went on to earn a degree in philosophy and theology and was ordained a priest when he was nearly 34 years old. In 1992, he was named as a Bishop of Buenos Aires; 1997, Coadjutor Archbishop; and 1998, Archbishop of Buenos Aires.  The five spiritual influences Moynihan examines are the prophet Jonah from the Old Testament; Mary, the mother of Christ; Ignatius of Loyola, founder of the Jesuits; Don Luigi Giussani, founder of the Communion and Liberation movement; and St. Francis. The last question is more speculative but some conclusions can be drawn from looking at his leadership as Archbishop in Buenos Aires.

Pray for Me also offers a news-type discussion of the first two weeks of the new pontificate – what Pope Francis did and said on a day-by-day basis from the time of the election on March 13th through Easter. While much of this is still relatively fresh in the reader’s mind, this section will become more valuable as time passes and memory fades as a historical record of the early days of this papacy.

The third section of the book is titled “In His Own Words,” and provides excerpts from Pope Francis’ homilies and addresses given over the years on topics such as God, Mary, Creation, Morality, Children, Youth, Culture, Politics, Religion and Sin.

Pray for Me is a wonderful introduction to the life and thought of Pope Francis, highly recommended to anyone eager to learn more about our new pontiff.

Order Pray for Me: The Life and Spiritual Vision of Pope Francis, First Pope from the Americas and support CatholicMom.com with your purchase