Help Make the Film "Brother Joseph and the Grotto"

Friends, many of you follow the wonderful #FundingFriday microfunding campaign spearheaded by our friend Matt Swaim. A few weeks ago, we helped raise knowledge about a film project that is in the works. "Brother Joseph and the Grotto" will tell the story of the amazing Brother Joseph Zoettl, who evangelized through his amazing artwork. The filmmakers still need our support, so I thought I would share this story here and invite your prayerful participation in making this project a reality. Please help in any way you can and definitely check out the video about the project. LMH

New documentary tells the story of Brother Joseph and his quest to serve God in a small way through his life’s work, the Ave Maria Grotto

"Brother Joseph and the Grotto" ~ Documentary Campaign from Red Clay Pictures on Vimeo. 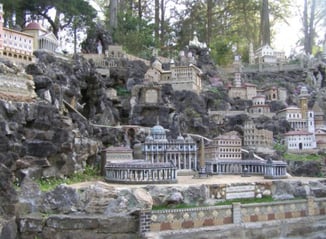 Birmingham, Ala. – This fall, a new documentary film, “Brother Joseph and the Grotto,” will be released throughout Alabama. The film tells the story of Joseph Zoettl, a hunchbacked monk from Bavaria and his quest to do something in a “small way” to serve God; which serves as the foundation of the creation of the Ave Maria Grotto at Saint Bernard Abbey in Cullman, Ala. The film was written and directed by veteran documentary-filmmaker Cliff Vaughn of Red Clay Pictures. Cliff got the idea for “Brother Joseph and the Grotto” from singer-songwriter Kate Campbell’s song Ave Maria Grotto; he also has a background in history and culture studies. Red Clay Pictures is based in Nashville, Tenn., with a satellite office in Birmingham that is headed up by Cliff’s sister and producer of “Brother Joseph and the Grotto,” Carol Ann Vaughn Cross.

“’Brother Joseph and the Grotto’ is a true fairy tale about a young boy who immigrated to the United States and helped transform a small piece of land in the Alabama woods,” said Cliff Vaughn, writer and director. “It is also an inspiring tale involving folk art, Alabama history, perseverance, and a life of devotion.” 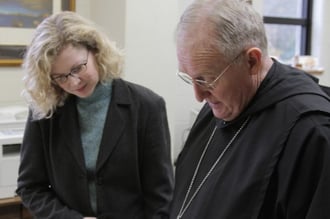 Cliff began his research for the film in 2011 when he began tracing Brother Joseph’s entry into the US through Ellis Island in 1892. Other research uncovered a 1946 newsreel segment by Paramount Pictures, an unpublished manuscript by the monks at the abbey, and Brother Joseph’s personal album of more than 300 postcards from his family members in Germany. To clarify some of Brother Joseph’s biographical information, Cliff hired a researcher in Brother Joseph’s hometown. In addition, Cliff had extensive access to the abbey’s archives for research and to the abbey’s grounds for shooting scenes of the film. Cliff’s research also uncovered a common theme in the archives: references to Brother Joseph as a “little soul” in the tradition of both St. Therese of Lisieux and St. Francis of Assisi, patron of the new Pope Francis.

The story of Brother Joseph is fascinating in that he helped build Saint Bernard Abbey, but, according to the customs of the day, his hunchback prevented him from becoming a priest-monk. He could, however, remain at the monastery as a brother. He was sent to various parishes throughout the South to cook and clean for priests serving those at the turn of the century. He eventually returned to Saint Bernard where he built a small stone grotto to the Virgin Mary. It was blessed by Abbott Bernard, who mentioned that one day they would build a larger grotto. 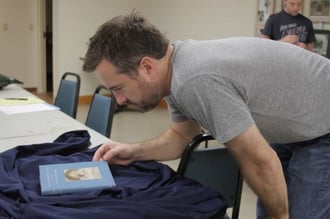 In the meantime, Brother Joseph found inspiration from a book by Theresa of Lisieux, who wrote about her desire to serve God in a “little way.” At about the same time that he discovered the book, Brother Joseph began making miniature buildings of concrete and recycled materials. This he did for several years, placing them by his original little grotto. It was not until 1932, however, that Abbott Bernard approached Brother Joseph to build a big grotto down in the abbey’s old quarry. Ave Maria Grotto eventually opened to the public in 1934. Brother Joseph spent the next 25 years building more miniatures to place beside the big grotto. These miniature masterpieces became known as “sermons in stone.” Brother Joseph died in 1961, and his funeral was held in the grotto park. Today the Ave Maria Grotto is hailed as one of Alabama’s leading tourist attractions.

Cliff goes on to say, “Closer scrutiny of Brother Joseph’s life and work has revealed a beautiful story – one whose new details only enhance the mystery in the abbey woods off I-65. We believe viewers will be as captivated by the magic and majesty of this single life, in service to God and others, as we have.”

His first documentary, “Immaterial John,” premiered at the Nashville Film Festival; his second, “Sawyerville,” at the Bluegrass Independent Film Festival. In his work for a non-profit, Cliff co-produced/directed a number of documentaries on social justice issues, several of which won awards and earned national distribution, including broadcast on ABC-TV stations.

Learn more about Brother Joseph and the Grotto