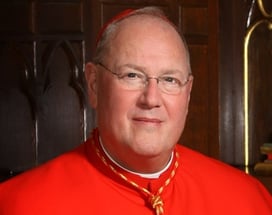 Conversation with Cardinal Dolan is a new show where Cardinal Timothy Dolan discusses important religious issues, gives his perspective on news from around the nation and the world, interviews big names from both in and out of the church and takes audience calls and questions about faith. Busted Halo’s Father Dave Dwyer also appears on the show.

Conversation with Cardinal Dolan is also on the Catholic Channel of SiriusXM Radio. Visit www.siriusxm.com/thecatholicchannel for more information.

In its premiere episode on The CatholicTV Network, Cardinal Dolan will discuss the US bishops retreat in San Diego, immigration reform, the HHS mandate, and political policies. Conversation with Cardinal Dolan will air on July 4, 2013 at 3:30pm ET. New episodes will continue to air every Sunday at 8:30pm, Tuesday at 3:30am, and Thursday 3:30pm.

St. Patrick's Cathedral, the largest decorated gothic-style Catholic Cathedral in the United States is the location of Conversation with Cardinal Dolan. You can learn more about the Archdiocese of New York and St. Patrick’s Cathedral here: www.archny.org.

All episodes of Conversation with Cardinal Dolan can be found on CatholicTV.com.