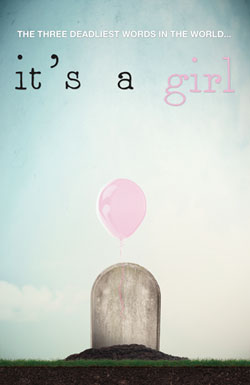 I did not put the words, “War on Women” in the title because if I personally saw such a title, I would assume it was a stupid article.  Of late, the labeling the defense of life in the womb and religious freedom as a war on women is beyond irritating.

It seems that rabid pro-abortion groups don’t have a clue what a war on women looks like. Why are they not rising up in a fury over the degradation of women in Middle Eastern countries where genital mutilation, forced marriages and judicial and educational inequality for women is just the tip of the iceberg?

Where was the outcry when the United Nations announced that an estimated 200 million girls are missing from the world due killing girl babies, now known as “gendercide”? Why are these supposed pro-women voices not getting behind the documentary, It’s A Girl. Take three minutes to watch this trailer and digest how readily girl babies are killed for the crime of being female.

And where the abortion-loving, contraception-pushing radicals when Planned Parenthood was caught on tape, not once but several times, encouraging the abortion of babies because the mother didn’t want a girl?   They have been silent on such atrocities because love of women is not their motivation but rather hatred of Catholic teaching that tells them abortion and forcing people to go against their moral conscience is wrong.

Yet, there is some truth in the twisted label of a “War on Women”. This is war—spiritual warfare!  And God-fearing Christians are all prisoners of this war. We accept such a position willingly as St. Paul did when taken prisoner. “For this reason I, Paul, the prisoner of Christ Jesus for the sake of you Gentiles, (Eph. 3:1).

The real war on women is being waged by the culture and like-minded men are our comrades and fellow prisoners. But in reality, it is we who are free while the anti-life, anti-religious freedom camp do not understand the true freedom-that comes from obeying God’s laws.

“For the slave called in the Lord is a freed person in the Lord, just as the free person who has been called is a slave of Christ.”  (1 Cor. 7:22) We, the slaves of Christ are free, and the cultural warriors against the teachings of Christ are enslaved.

The issue of this supposed War on Women is access to contraception and drugs that induce abortions by forcing organizations to make them available to their employees regardless of religious values.  I would like to point out that there are more male than female-owned companies and heads of organizations that are being told they will be forced by the government to go against their conscience.  That is a war on both men and women.

Planned Parenthood is leading the war cry that anti-abortion Republicans are waging war. For the sake of not over-using the word “stupid” let’s call this one ignorant.  There are more women on the other side of this issue. The 2012 Gallup Poll revealed 2% more women are prolife over prochoice: 46% vs. 44%. When it comes to partial birth abortion, 62% want to see that barbaric procedure banned.

As far as demanding abortion and contraception, both are really anti-women but the liberal mindset is too blind to see. Men in our society are less responsible to the women they impregnate. After all, the women should have been using contraception and can use abortion as after-the-fact birth control. With that mindset, why should a man be burdened with a child when he was in it just for the sex not the fatherhood?

Women are getting hurt, not helped through contraception and abortion.  They are becoming sterile through Sexually Transmitted Diseases, getting used for their bodies, and becoming the walking wounded after their abortions where their suicide risk is six times higher than the average.  But the Catholic Church and those who follow its teaching is not trying to force this truth and freedom on anyone, we just don’t want to be forced to pay for the intrinsic evils that hurt individuals and societies.

Half the babies aborted would have been future women if given the chance to be born. So, war it is indeed but not just on women and men—on all society.  In the end, we can fight in the courts, wage a war with words and vote our conscience, but that is just the ground strategy.  Spiritual battles are won by God and the ammunition is prayer and fasting.  Let’s all pray for fortitude and unite ourselves under the kingship of Jesus Christ.

Support an Evangelist, Shop Catholic
Read
From Catholic School to Prison
Read
No Excuses, Just Grace: My Weekend in a Women's Prison
Read