Time to Pass Down the Patriotism 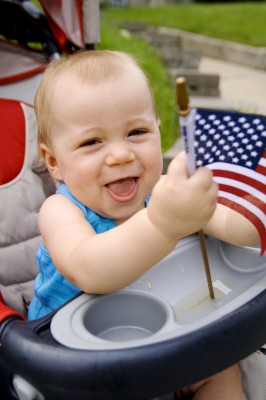 Time to Pass Down the Patriotism

To: Marybeth
From: Patriotic Grandpa

Our (otherwise delightful) grandchildren seem to have no concept of American patriotism. By the time we were in high school, we knew much more about American history and government than they do, and we also were taught to respect and honor our country’s traditions. What can we do to promote patriotism in our grandkids?

To: Patriotic Patriarch
From: Mb

A few years ago, “Tonight Show” host Jay Leno famously produced a “Jaywalking” edition for Independence Day. His “man on the street” interview offered some stark — albeit funny — examples of the state of our American identity.

Jay: “What do we celebrate on Independence Day?”

It took several attempts until, finally, a learned grandpa answered Jay’s simple questions about our nation’s founding, our form of government, and the people who currently occupy positions of power.

Perhaps the most disheartening interviews were the few Jay did with children. They really didn’t know anything about our nation’s history and heritage. That video made it clear that Americans need to do a better job of instilling in our children the values and knowledge required for good citizenship.

In the past, we assumed that our children were learning about our nation’s history and culture in schools — and to be sure, many still are. But generally, they aren’t taught to be patriots. The places where our children develop their worldview — through our education system, media and in pop culture — don’t encourage or even value the customs of patriotism that help develop children’s love for America.

In her book “How to Raise an American Patriot: Making it Okay for Our Kids to Be Proud to Be American,” author and blogger Marijo N. Tinlin shared the five pillars of patriotism:

•Learning about our history. “You don’t have to be an expert to do this,” Ms. Tinlin says. “It’s easy to spark an interest in history within your children. Read the founding documents together, and about what these documents mean for your kids in their lives to make it real for them.”

•Having faith. “We have natural rights, as it says in the Declaration of Independence, which do not come from the government,” Ms. Tinlin reminds us. “Contrary to what many people believe, we simply cannot take God out of the equation of this great country and we need to make sure our kids understand that.”

• Being good citizens. Ms. Tinlin recommends helping children get involved in groups that teach them the habits of good citizenship. “Besides getting involved, show your kids good citizenship by flying the flag and attending Veterans Day ceremonies and Independence Day parades. And always thank a veteran when you see one; that makes an impression on your children,” she says.

• Doing your duty. “Vote. By showing your children that you care enough to vote for our leaders, it conveys to them that they have a voice too. Take them to the state capital or Capitol Hill. Write or call your congressmen or senators when you disagree with what they are doing. By showing your children you hold these people accountable, it will encourage them to do the same.”

• Passing it on. “One of the most important things we can encourage our children to do is to spread the idea of patriotism to their friends. It’s not just parents telling them what to think; it’s them thinking for themselves why they love this country and then telling their friends why they should join in this love.”

Let’s all make our celebrations of Independence Day a reflection of the gratitude we feel to be citizens of the United States. Let’s not just enjoy the day with family and friends, but spend at least part of it remembering the sacrifices of those who secured our freedom in 1776 and those whose courage has protected it ever since.

Happy Fourth of July — enjoy another day of American independence.

Patriotic Pies and Pot-lucks
Read
PATRIOT'S DAY Film a Story of Love and Courage
Read
Patriotism: For Love of God and Country
Read