Commander Shepard has saved an interstellar UN.  He's stopped an invasion of the galaxy by an entire race of almost unstoppable, living spaceships bent on consuming the races of the universe.  Now the enemy has arrived, and only Shepard can stop them. 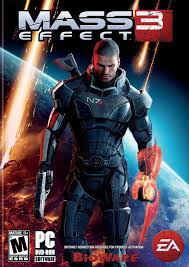 After years of warning anyone who will listen about the Reapers – the almost unstoppable living spaceships bent on consuming the galaxy – they have arrived, and they start by hitting Earth.  The only way that Shepard can stop this doomsday fleet is by convincing the major alien powers that Earth is the place to stop the Reapers. Now you have to play the art of the deal on an interstellar scale.

The Mass Effect system mechanics remain largely unchanged from the last installment. The world, however, is altered based on your choices in the last game.  There is no resource scanning like in the last game. You don't mine individual planets for resources, but come in to a solar system, and ping like sonar.  However, this comes with it a slight catch – ping too often, and the ship is going to be hip-deep in Reaper Dreadnoughts faster than you can say RUN.

The graphics are just as good as they were in Mass Effect 2, if not better. The character design? Even better.   The score fits the game nicely.

Like the other games, there are more shades of gray than black and white choices. However, I can tell you that there is no nudity, and the swearing is severely cut down. In fact, I can't recall any.  There are no impaled humans to be turned into Geth drones, and the particularly horrific plot twist in Mass Effect 2 isn't on screen.

There is multiplayer, but only online.  There's no co-op experience here. Overall, it's not bad.

That's a tossup.  Unlike Mass Effect 2, where the final scene is the payoff, most of the consequences of your choices will be scattered throughout the game. If you've played Mass Effect 2 in several different variations, you might want to go through Mass Effect 3 to see how they all shake out.  It's possible you'll want to play this game repeatedly. Though I can't imagine it.

The ending … you may have heard that the original ending consisted of interchangeable, color-coded cut scenes that had no bearing on your choices in the game. That's no longer true. And if you get the trilogy pack that's recently come out, you'll see what I mean.  But, darn, I wanted something a little better than what we got.

And the voice acting is still spectacular.