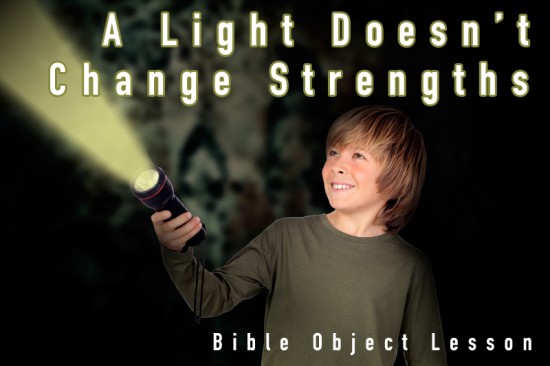 This lesson can help kids understand that while a glorious transfiguration will occur to us at death, in life we have to be like Jesus and the disciples; we have to keep going with some mundane, worldly tasks in mundane places. If we make it through, that transfiguration will happen for sure and forever! The use of a flashlight under some big blankets can get the point across very well.

Preparation
Place the flashlight beam into the grippy part of the sock above the ankle, so that when you turn it on, the foot part will light up.

Unless you have a truly magnificent flashlight, this lesson will work better with some of the lights dimmed.

Lesson
Today is Transfiguration Sunday. What does Trans-fig-ur-ashun mean? They probably will not know.

Hold up the flashlight and hold the sock out in front of it.

It means a “change of form or appearance into a more beautiful or spiritual state.”

Turn on the flashlight so the sock lights up.

We could almost say this sock is behaving like Jesus did during a time when he was transfigured. It’s written about in Mark Chapter Nine:

“…Jesus took Peter, James and John with him and led them up a high mountain, where they were all alone. There he was transfigured before them. His clothes became dazzling white, whiter than anyone in the world could bleach them. And there appeared before them Elijah and Moses, who were talking with Jesus. Peter said to Jesus, “Rabbi, it is good for us to be here. Let us put up three shelters—one for you, one for Moses and one for Elijah.” (He did not know what to say, they were so frightened.) Then a cloud appeared and covered them, and a voice came from the cloud: “This is my Son, whom I
love. Listen to him!”

Suddenly, when they looked around, they no longer saw anyone with them except Jesus. As they were coming down the mountain, Jesus gave them orders not to tell anyone what they had seen until the Son of Man had risen from the dead.

Hold up the sock again and light it.

The mountain where Jesus was transfigured became covered in a huge cloud. And everything in that cloud turned incredibly bright. Jesus, Moses and Elijah were so bright and beautiful that the apostles must have thought they’d died and gone up to heaven.

What did Peter suggest to the Lord? That they build tents and stay up there.

Why do you think Peter wanted to stay? Because it was so pretty and he felt safe around the beautiful beings.

The life of a disciple is lots of hard work… and walking dusty roads between dirty cities… and never owning anything except the clothes on your back and a few other things….and being laughed at by non-believers.

Can you blame Peter for wanting to stay up where everything was pretty instead of where people often laughed at him and where life was hard? No.

If you could find a safe, beautiful place, wouldn’t you want to stay there instead of going to school, where maybe there’s a bully? Or being at home when it’s a mess and your parents are overworked and sometimes grumpy? Yes

Light up the sock again.

What happened at the Transfiguration is that God’s light shown brightly in the cloud. Peter felt God was very close…and he wanted to stay in that beauty and safety.

But (hopefully!) none of us our dying tomorrow. It may be quite some time before we experience our own transfigurations.

Separation the light and the sock. Hold up the sock. This is like us. We’re asked to do some things in this world that are dull and dim and not fun in comparison to the next world.

Put the sock on your hand and pretend to dust the table.

We’re asked to help clean up messes, do chores, finish homework, study for tests, and not complain.

Sometimes we’re asked to do really gross things! Like get near things that smell or people who “spiritually smell” because their sins are great.

As Christians, we’re sometimes asked to carry the burdens of each other. It’s like this sock being smooshed against the floor, with smelly stuff inside!

Have the child walk around the table with the sock on.

Turn up all the lights in the room that were dimmed, so it is now bright. Sometimes the busy bustle of life can give you a headache. But here’s something I want you to see:

Turn the lit flashlight to all the faces.

But is it really? Is the bulb in the flashlight burning any harder or any brighter whether it’s in the sock or not? No, it burns the same.

It’s just harder to see in this busy, bright room.

Let’s wait patiently for God to come and transfigure us into his wonderful, shiny kingdom of heaven. And when things get rough on earth, and we can have trouble detecting where God’s light is coming from, let’s remember that our day is coming. And in the meantime, let’s be the enthusiastic socks who have so much hope that they don’t complain!

NFP Works! Even When It Doesn't
Read
Regretting your Marriage Doesn’t Mean it was a Mistake
Read
Advent Doesn't Have to Be "All or Nothing"
Read