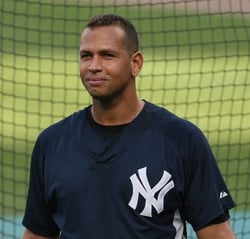 Q. This week’s suspension of New York Yankees star Alex Rodriguez and 12 other major league players for ties to performance-enhancing drugs is yet another example of celebrity athletes setting a horrible example for their young fans. It seems celebrities of all stripes enjoy the fame and fortune that comes with their high-profile careers but never give a thought to the responsibility that comes with it, which is to set an example of good character and values. How can we get kids to stop idolizing sports stars and other famous people?

A. News of the “A-Rod” suspension, his subsequent announcement to appeal it, and the decision to play ball on the very day he was put on a professional “timeout” seems to demonstrate that for America’s celebrity class, rules are made to be broken, and consequences are made to be ignored.

I know, I know there’s a process that Major League Baseball allows in these situations, and the player is entitled to continue playing while his case makes its way through that process. But it’s clear the would-be Hall of Famer isn’t appealing so that he can prove his innocence, but rather, so he can negotiate a less severe punishment. (As it is, he’s suspended for 211 regular season games, through the 2014 season.)

You don’t have to be a baseball fan to feel cynical about this situation — and not because, according to my lifelong Yankees fan husband, A-Rod engenders cynicism like no other. He’s merely the latest in a long string of famous folks whose bad judgment, disrespect for rules, indiscreet behavior or outright stupidity (looking at you, Anthony D. Weiner) insults the intelligence and integrity of the public at large.

We’d like to think that only the best and brightest achieve celebrity status. And having done so by virtue of their talent, work ethic, grit and perseverance, they deserve the admiration and support of their devoted fans.

But alas, you can be really good at a lot of things and still be a poor excuse for a human being, and some people are just that.

It’s time to help our children’s generation learn to discern between the wheat and the chaff when it comes to public figures. They don’t need to necessarily give up on every famous person as a role model, but let’s make sure they know that there are other wonderful athletes and entertainers out there who may not grab as many headlines, but who set stellar examples of how to live with character and integrity in a competitive, fame-crazed world. (Take a bow, Kirk Cousins.)

More importantly, it’s time to stop feeding the celebrity beast by promoting the idea that famous people are famous for the purpose of our emulation. They’re not. They’re famous because they achieved a measure of success defined largely by how many followers they have on Twitter, and how many people might swarm them at a restaurant. Oh, and of course, by how many millions they make doing whatever it is they do.

Parents and grandparents, you’re still the best role models your children will ever know. They may be enamored of a famous singer or movie star or baseball player, and thanks to social media, they may even become obsessed with the comings and goings of celebrities they will never meet.

But when it comes to setting an example of good character and living out the values that make one a truly admirable and honorable person, those of us who surround our children have more impact and importance than a thousand A-Rods.

So the question isn’t, “What can we do to get children to stop looking up to failing celebrities?” It’s, “What are we doing to get them to look up to us?”