What Parents Need to Know about Baptism 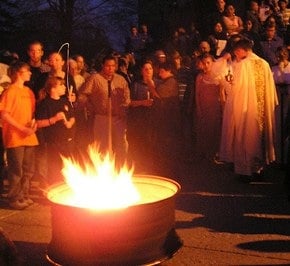 Outside the Easter Vigil, I finally believed.

Baptism is the gateway to the spiritual life. All the other sacraments depend on it.

When your children were baptized, their souls were changed, reconfigured to accept God’s divine life within them. They also received the power or capacity to believe divine truths.

But is that all your child needs to have faith? I had all that but still fell away as a teen. It was another 20 years before I awakened to God and had real faith.

If Baptism does everything it’s supposed to do, how could I be indifferent and walk away? Is it the case that sometimes Baptism doesn't work?

The answer is tied up in the faith I found before my 33rd birthday and the Easter Vigil where I realized--for the first time in my life--that Jesus was really, truly present in the Blessed Sacrament.

I learned about the Eucharist but it didn't matter

I grew up Catholic and did the whole after school religious education thing. I’m pretty sure I learned about the Real Presence at some point--it just never mattered.

As a kid, the only thought I remember having about the Eucharist (and this is shameful) was that it tasted like cardboard.

I stopped practicing Catholicism as soon as I was able...right after my 8th grade confirmation. By the time I was in college, it was all done.

Eventually, I came back to the Faith

I ended up joining the Navy and getting married to a girl in the exact same faith situation as myself...a cradle Catholic who left the Faith in her teens. While stationed in Japan, we reverted to the Catholic Faith. It was the winter before our 33rd birthdays.

Our coming back to the Church was like a whirlwind. If you were there and blinked, you might have missed it! We started looking at Catholic teaching around Christmas. By Lent we were praying the rosary every day and going to Mass regularly.

Over the course of that Lent, we became deeper and deeper immersed in the life of the Catholic community at the base chapel--working with the homeless food ministry, going to daily Mass, and teaching religious education classes on Sundays.

My wife was even asked to be a sponsor for RCIA. She took that role very seriously. After all, she was also trying to learn too.

The night the Eucharist became real for me

So, there we were, standing outside the base chapel at the Easter Vigil with Martha, the candidate my wife was sponsoring. It was the first time I had ever been to the Easter Vigil.

I remember turning to Martha and saying, “When I was a kid before I made my First Communion, I always wondered what the bread tasted like.” I continued with a chuckle, “Then I found out. It tastes awful--just like cardboard.”

And just then, it hit me...that was Jesus! He was that "bread" I was joking about.

I was taken aback, shocked at what I had just said. There was an uneasy look on Martha’s face as well. I just smiled a little and shut up, embarrassed and humbled at what had just happened.

I had never believed or cared what the Eucharist really was. It never mattered to me. However, at that moment, it was everything.

Baptism requires a response of faith

The answer to the question is this--Baptism always works, just not the way you might think. It can completely transform you into a new creation. But that doesn’t happen automatically.

Baptized infants receive the capacity to believe, but that’s different from actually believing. Faith in children is kind of like a seed that lies dormant in the ground until activated by watering.

The water in the case of Baptism is a personal Act of Faith--a voluntary assent to the truths reveled by God, a desire to be transformed by his grace, and a willingness to love him by following the commandments.

If a child is never led to personal faith, Baptism has virtually no effect. It stays dormant. They’re still baptized but it doesn’t show.

It’s not enough to simply teach kids the facts of the Faith. They must come to a personal belief in the saving power of Jesus Christ and accept it as part of their lives.

I learned about God but not to believe in him or to desire his power and influence in my life. When, over the course of that winter, I began to truly desire God and make him an active part of my life--something inside me changed. I began to believe.

Supernatural truths that once were beyond me now became real. All of a sudden, standing outside a church before the Easter Vigil, the truth of Christ’s presence in the Eucharist became a substantial reality.

If you want your kids to have faith, you have to nurture it. Lead them to make personal acts of faith. Help them to make Jesus an active part of their lives and have a personal relationship with him. Teach them to love Jesus and make him a central part of everything they do.

Nurture your children’s faith this way and it will flower and grow throughout their lives.

Should Children Be Baptized Without Their Parents Knowledge?
Read
Baptism by Fire
Read
Perfect Gift for Baptism
Read