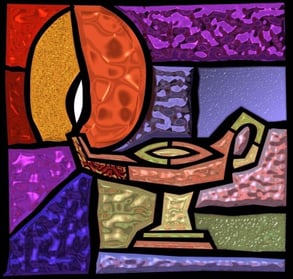 I recently visited Italy and was reminded of the religious contrast between America and Europe. In Europe, large numbers of people consider themselves agnostics or even atheists.

In America, something like 95% of the population “believes in God.” Nearly as high a percentage also believes that there is a life after death and that people are rewarded or punished by God in the next life based on how they lived this life.

So does that mean that there is a higher level of Christian faith in America than in Europe? Not necessarily. Because true faith entails a whole lot more than belief.

Hebrews 11 is one of the classic places in the Bible that discusses the nature of faith. “Without faith,” says the author, it is impossible to please him.” Certainly such faith includes and presupposes convictions about things that can’t be seen or proven. “Whoever would draw near to God must believe that he exists and that he rewards those who seek him (Hebrews 11: 6).

But mere belief can be objective and detached. I’ve never been to China, but I believe it exists. I don’t plan on going any time soon, and my belief that China exists has no impact on my daily life.

True faith is much more personal than this. The New Testament authors actually came up with a new and very strange grammatical construction in Greek to try to convey the personal nature of Christian faith. It is not about just believing that Jesus is the Son of God, or that he died for our sins or that he rose from the dead, but believing in him, or even into him. Faith is a dynamic journey in Christ, a plunge into the depths of God. Pope Francis’ recent encyclical, Lumen Fidei, makes this clear. If you have conviction that God is omnipotent and all loving, then you must entrust yourself, your loved ones, and your future entirely to him. You take a risk, assuming that he indeed is trustworthy. In fact, that is the origin of the Hebrew word “amen” which is connected to the word for rock. To say “amen” literally means “it is reliable, I can stand on it!”

Lovers who say they “believe in” their beloved show it by making a public pledge to be faithful to each other till death do them part. This is the covenant of marriage. The act of Christian faith is a lot like this. It is a conviction that leads believers to entrust themselves in love to God in Christ and commit themselves to an exclusive relationship to this God, come what may. In fact the verb “to believe” in Latin is “credere” which is related to the Latin words “cor” and “dare”, to give one’s heart. Even in the English language the verb “be-lieve” is related to the German/Saxon verb to love.

So true faith can’t be cool and aloof. It must move from conviction to confidence to commitment for it to be authentic and mature. Do you believe that a Supreme Being exists and that he knows you better than you know yourself and loves you better than you love yourself? Then it would make total sense for you to surrender yourself completely to him and do whatever he tells you.

That’s why Abraham is the prime model of faith in the Old Testament. He did not have that full revelation of God in Christ that we are privileged to possess. In fact he did not even know God’s name. But when this Unknown God called him from the comfort of Mesopotamian civilization to wander in an unknown land, he packed up and left (Genesis 12). And when this God required the sacrifice of his only son, the son he had waited for all his life, he did not hesitate to comply (Genesis 22).

Abraham had the courage of his convictions. He acted on what he believed. As for the countless Americans who believe in God . . . if their belief was true faith, there would not be millions of unborn babies legally murdered in this country year after year.

It is easy to shine the searchlight on our neighbors. But how about us? Does the way we vote, spend, work, plan and play reflect what we say we believe?