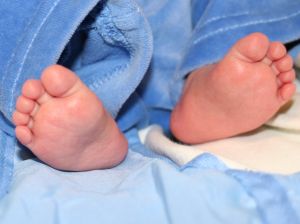 You know those yucky brown iron-vitamin drops that pediatricians recommend for breast fed babies?  The stuff that stains everything it touches and makes your baby’s poop turn green?  I must confess that I’ve never been good at giving infant iron drops regularly, which is probably why all four of my children have had borderline anemia as infants.  Finally, we’ve found a better way to prevent neonatal anemia—delayed umbilical cord clamping.

Usually the umbilical cord is clamped within one minute of a baby’s birth, but it seems that waiting just 1-3 minutes after birth to clamp the cord allows the placenta to give a few more pulses of blood to the baby.  This extra blood from the placenta can be as much as 30-40% of the baby’s total blood volume.  And all that extra blood can prevent anemia in the first six months of life.  Waiting these extra few minutes before clamping the cord is referred to as “delayed cord clamping.”

This conclusion is supported by a new meta-analysis of years of research published in the July 11th issue of the Cochrane Database of Systematic Reviews.  This analysis included almost 4000 women and their babies.

But delaying cord clamping did make a difference to the health of the babies. Between one and two days after birth, their haemoglobin levels were higher; between three and six months after birth, they were less likely to be deficient in iron.

The research continues to show that delayed cord clamping can slightly increase an infant’s risk of jaundice, by about 2%.  This may increase a baby’s need for a repeat blood test for jaundice.  But even severe cases of jaundice are easily treated with a few days of phototherapy, especially in areas of the world with good access to medical care.  Jaundice is rarely dangerous when appropriately screened for and treated.  Anemia, on the other hand, is associated with poor cognitive development in infants and children, among a host of other problems.  Treatment and prevention of anemia is primarily with iron supplementation—those infamous brown drops.

Let’s be realistic about iron supplementation—how many breastfeeding parents really give the brown infant drops (often sold under the brand name poly-vi-sol)?  I’ve even had parents tell me they stopped breastfeeding just so that they wouldn’t have to give the poly-vi-sol anymore.  One of my own babies always spit them up within ten minutes, spewing greenish-brown partially digested breast milk all over our house and our clothes.  We had to rip up the carpets in our old house before we sold it because there were so many poly-vi-sol stains.  My husband flat-out refused to give it anymore.  I went to a pediatric lecture about the dangers of infant anemia and, feeling very guilty about my non-compliance with poly-vi-sol, asked all the pediatrician-parents I know how they got their babies to take the stuff and keep it down.  Most admitted that they stopped giving it after a few months…

All newborns need vitamin D supplementation, and breastfed infants do still need those iron drops starting at age 4 months if they have not yet started solid foods.  The AAP recommends starting your baby on solid foods including iron-fortified cereal at age 4-6 months, and once they do you don’t need to give the iron drops anymore unless your baby has anemia.