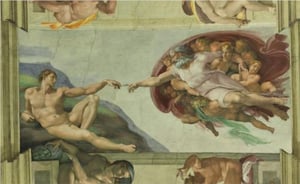 On Trinity Sunday, our pastor declined to try to explain the nature of the Trinity to us; he said that anyone who tries to do so is going to get it wrong in some way, and rather than being a heretic he chose to speak on other aspects of the Trinity.  And there's a great deal in what he says: the Trinity is a great mystery, and there's no way for us in our human frailty to fathom the depths of it, or even to fathom the shallows.

Most especially, we know that the three persons of the Trinity are bound together by bonds of love.  God is Love; Love within Himself.  And it is precisely in this that we see the great glory of the incarnation.  Jesus, true God and true Man, extends the hand of that divine Love to the rest of us, so as to draw us into the inner life of the Trinity.

The ceiling of the Sistine Chapel famously shows the Creator extending His hand to Adam, yet they do not quite touch; and, of course, at the time of creation the Son was not yet incarnate.  But now Jesus has come, and is true Man, and He extends his hand to us, and we can clasp it and be drawn in.