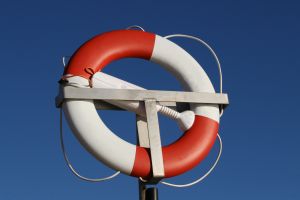 So often I lament my weaknesses, wishing I could be more and do more; be stronger and more talented and capable. But that doesn’t hinder the Lord from using me when I make myself available to him. My poor swimming ability is one of my weaknesses. Because of my poor eyesight as a child and a near-drowning incident when I was 12, I didn’t learn to swim confidently. But God used what seemed like a useless weakness in two different instances to help toddlers survive.

One July 4 a few years ago, my son Andrew brought his two boys and baby girl to the neighborhood patriotic parade. Then, as my husband strolled the baby home for a nap, Andrew and I took his two boys to the pool. I sat on the steps of the shallowest part of the baby pool while Andrew changed the boys into swimsuits.

A young father set his toddler daughter into the pool while he also suited up his young son. The little girl, about 2 years old, happily began to walk around in the waist-high water. Soon she became unsure of her footing. She kept falling down, swallowing water, and gasping for breath. I moved closer.  Suddenly she went under and began floundering. I grabbed her out of danger before she drowned in the shallow water that seemed so safe and fun.  Her father came running when he heard her cry. He thanked me for saving his child’s life and we shared a moment of true joy.

During another holiday swim, this time on Labor Day at the “members only” pool in our housing development, I was jogging back and forth across the pool. The rest of the family swam in the deep but I stayed in the shallow water.  I saw two precious little girls, adorned in their braids, coming in the gate. The five- or six-year old borrowed one of our foam noodles and took the two-or-three-year old to the baby pool. Two teenage cousins watched them from lounge chairs in the shade. When the two little girls came over to the big pool to play on the steps I kept glancing their way, remembering the July 4 incident.

Then it happened – the littlest girl step off the bottom step. She got turned around as she tried to get back up and began floundering in water over her head. I yelled as I started toward her and scooped her up out of the water just as one of the teenagers leapt into the water from the other side.  I gave the gasping child over to the shaking teenager who comforted her cousin and thanked me.

When the mother heard the commotion she ran over from the picnic area where the large family had gathered for a cookout. Hugging her scared toddler, she thanked me profusely saying, ”Angels are everywhere!” Again I shared a joyful moment with a grateful parent.

In both these incidents, if I had been a strong swimmer I would not have been anywhere near the impending disaster! So accepting my weaknesses becomes easier when I realize how God readily uses them to save others.  He also used the motherly instinct he created in me as an alert system in situations involving children.

He uses everything we are: our inability, our availability, our concern for others and our willingness to do whatever it takes to bring true joy into the lives of others. I wonder what other useless weaknesses of mine the Lord can use.

Which of your weaknesses can you imagine God using to help others?