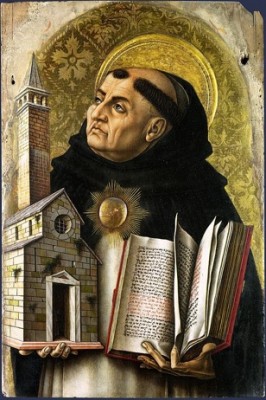 When I was a young Catholic kid, I didn't give much thought to the saints.  I remember being given a book entitled Picture Book of Saints, I think probably by my grandparents, probably for my first communion.  (You've seen it; it's the one with the mostly orange cover.)  I was a big reader even then, but I didn't read the book.  I leafed through it, observed that most of the saints looked funny and had funny names and that none of them were named William, and put it on the shelf.  I might have taken it down once or twice, but I think the next time I gave it much thought was when I needed to choose a patron saint for confirmation.

Now, mind you, nobody told me I was picking a patron saint.  I was told, if I recall correctly, that it was customary to take a saint's name for confirmation, and that I needed to pick one.  If my CCD teacher said anything about asking my saint for prayer or guidance, I don't remember it.  So I looked through the book and picked St. Michael Archangel because he seemed pretty cool.

So much for catechesis in the years immediately following Vatican II.

Then I got married and became an Episcopalian and continued giving much thought to the saints.

And then…well, and then I met St. Thomas Aquinas.  I met him in the pages of G.K. Chesterton's biography of him, and was immediately taken with him.  He made sense to me, and he made more sense as time went on.  Thomas was a great philosopher and theologian, of course, and my first link to him was that as a philosopher he started from a place that made sense to me.  I had taken one philosophy course my freshman year in college; it started with Plato and then jumped straight to Descartes and then to Hume, and I was convinced by the end of the course that Descartes and his successors were just plain nuts and that philosophy wasn't worth bothering with.  Chesterton persuaded me that there was a philosophy that wasn't nuts and that Thomas was the man.  I liked him already.

And then, I'm a software engineer by profession.  I spend my days thinking about and working with fine and subtle distinctions about abstract notions that you can't see or hear or touch.  Thomas, it was clear, did the same.

And then, in the months when I was journeying back toward the Catholic Church I began to learn more about Thomas' holiness.  He wasn't just a great thinker; he was truly a saint, and for perhaps the first time I asked a saint for prayer and truly meant it.  And I got the help I asked for: help to be a better person and a better Christian.  In due course I returned to the Church, and when I made my first profession as a Lay Dominican (What?  You mean I can be a Dominican like Thomas?  Woohoo!) I took Thomas as my patron.  And Elder Brother Thomas remains a constant help to me.  Doing what I do, it's nice to have a patron who understands the importance of thinking and communicating clearly.

Since then I've made the acquaintance of many other saints who walk along with me day by day, St. Dominic not least among them, but I will always honor St. Thomas: the others walk along with me, but Thomas came and got me.