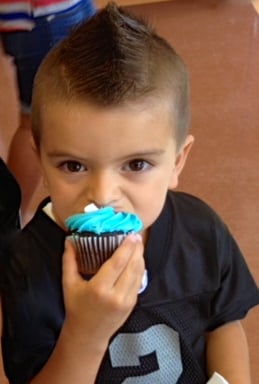 Our ways are not the Lords ways... thank God! Because God’s ways are so far beyond ours, and let’s face it, they are much neater. We can plan all we want, but when it comes down to it, the Lord always finds a way to not only appreciate our “loaves & fishes” efforts, but He multiplies them.

Take today—a simple day in the liturgical year, the 22nd Sunday of ordinary time; but not ordinary by any means. Today is the day we recognize the Blessed Mother’s birthday. With that little bit of knowledge in mind, and knowing I would be traveling to the west coast, my friends and I thought, “Hey, why not have a birthday party for Our Lady?” So my friend Rita ran with the idea.

Rita planned a little birthday party for 4,500 families for the Mother of God, not a small undertaking. For the record, when you talk about charisms, Rita oozes the gift of hospitality. So much so, she invited everyone to be a part of the party. Not sure if that was her gift of hospitality shining, or the way Catholics rope in people to volunteer! Either way, it worked, and many gifts came together to create a marvelous celebration for the Queen of Heaven.

In her planning, Rita met with the various parish committees to make the day special. With the Liturgy Committee she decided the recessional song would be “Immaculate Mary” and that once the priest walked up the aisle, the congregation would sing Happy Birthday to the Blessed Mother. With the Knights of Columbus she planned to swap out the weekly donuts and coffee and have them sponsor blue cupcakes and punch. The Spanish Liturgy Committee was in charge of the decorations, and the Hearts Afire, Divine Mercy and Our Lady of Perpetual Help ministries hosted the cupcake soiree after each Mass. Rita made throwing this party a wonderful collaborative endeavor for the members of St. Clare’s in Roseville, California.

All of this was impressive enough, but when the Lord saw Rita’s impressive efforts, guess what, He multiplied them. He took her beautiful efforts to bring an awareness to the importance of recognizing the birth a woman whose “yes” to God’s will would change the world, and He made sure thousands were “fed”, and He did it in ways that we didn’t even think of.

Though we never saw picking up cupcakes at Sam’s Club as an opportunity to evangelize, the Lord did. Three times on the cupcake pick-up excursion Rita was asked if the 500 cupcakes were for a wedding, and she joyfully responded, “No, they are for the Blessed Mother’s Birthday.” You can imagine the looks exchanged and the great conversations started at the sound of those words.

Though it was planned to sing Happy Birthday to the Blessed Mother after the first verse of “Immaculate Mary” during the recessional hymn, it wasn’t planned to have it broadcast on Immaculate Heart Radio... well, at least is wasn’t planned by Rita and committee. It appears Our Lady doesn’t mind how many people know she’s another year older, because the 9:30 am Mass at St. Clare’s was aired for all to hear, birthday wishes and all. I can’t help but think of the discussions generated as people heard the congregation singing Happy Birthday to the Blessed Virgin.

As if being an outlet to share the Good News wasn’t enough, Our Lady used her birthday celebration to teach the littlest among us how to live the Gospel. As the children left the church to hear the Gospel read to them at the children’s gospel time, they had to walk past a table of beautifully decorated scrumptious looking cupcakes and not touch a one! The Gospel on Sunday was about carrying your cross. You’d be hard pressed to find a bigger cross for a wide-eyed hungry 5 year-old, than a tower of untouchable cupcakes with mountains of frosting.

After all was said and done, crosses endured became blessings as chocolate crumbs littered the floor and blue frosting stained little teeth. Various committees got to be of service to their parish family, and workers at Sam’s Club and listeners of Immaculate Heart Radio perhaps found themselves pondering the birth of the Mother of God, a thought that hopefully did what our perfect Mother always does, pointed to the greatest birth of all, the birth of Our Lord.