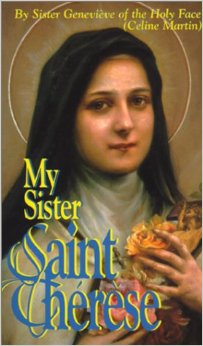 My mother always considered St. Therese to be one of my patron saints and so I have always had a great devotion to her. From my earliest years, I knew the story of her life and at age nine, I first read her “Story of a Soul”. I’m a bit embarrassed to admit, I wanted so much to be like her that I actually sat down to write my autobiography – at age nine!

Over the years, I’ve reread her autobiography several times as well as several biographies about her. I always find something new to take with me. But, I had never heard of the book, My Sister Saint Therese, written by her biological and spiritual sister Celine, until very recently. If you are seeking to know more about St. Therese, this is a book you will definitely want to read.

Celine Martin was only four years older than Therese and one of the people on this earth closest to her. She entered the Carmel of Lisieux several years after Therese and was given the name Sr. Genevieve of the Holy Face. At that time St. Therese served as an assistant director of novices, entrusted with the spiritual care of those under her. Sr. Genevieve was one of the souls who derived much from both St. Therese’s spiritual advice and her example in life.

Sr. Genevieve relates how St. Therese had a great gift for spiritual discernment. She stated that “each soul . . . should be dealt with in a different way.” Sr. Genevieve and the other novices were sometimes convinced that she could read their souls. She directed them in the ways of humility, poverty of spirit, love of God, fraternal charity, mortification, and patience in suffering.

Sometimes, in reading about saints, we become convinced that we could never, ever, in a million years, be like them. They are so far above us – so good, so holy. We, on the other hand, are well-intentioned but spend a lot of time traipsing through the muck of life. In her writing, Sr. Genevieve comes across as very human. She suffered from the same failings the rest of us do – she could be self-centered, quick to judge, lacking in charity, and overly attached to material goods. In sharing what St. Therese said to her by means of advice and gentle correction, we can also hear what St. Therese might be saying to us.

Sr. Genevieve also served as an infirmarian and had care of her sister as she was suffering from her last illness. As such, she was able to offer wonderful witness of how this great saint endured and offered up her suffering for souls. She also had a window into St. Therese’s spiritual darkness. For seven years before her death , St. Therese experienced no consolation. “She was experiencing nothing but doubt, anguish, and darkness.” Yet, she chose to believe, to pray, and to have faith, and she always offered a cheerful countenance to those who were in her presence. Even as she was dying, the other sisters would seek her out, eager to spend time with her.

Sr. Genevieve was in a unique position to offer an intimate portrait of St. Therese, who would later be named a Doctor of the Church. This memoir of her sister is one all fans of St. Therese will want to read.

Order My Sister Saint Therese and support CatholicMom.com with your purchase

My Sisters the Saints
Read
Sisterhood of Saints: Daily Guidance and Inspiration
Read
The Sisters of the Visitation Celebrate 400 Years by Patrice Fagnant-MacArthur
Read