I’m Not Gonna OS and You Can’t Make Me

Last Thursday night, I left my jacket in the church after choir practice. I was halfway out of the door when I realized it, which necessitated heading back into a dark church to grope for the navy jacket on a dark gray chair.

Had I updated to iOS7, I would have had a built-in flashlight (and probably wouldn’t have run into the piano), but as it was, the light provided by my cell phone had to suffice, as I had no idea how to turn on the lights in the sanctuary.

My husband would have had the flashlight. He was all over this update, backing up his phone and my daughter’s the night before the update was released so he’d be ready to download iOS7 at the first possible opportunity. He’d have taken care of mine, too, if I’d let him get his hands on it. 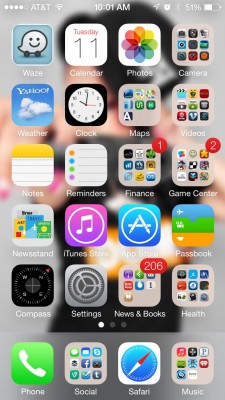 I am not a quick upgrader. When I master a piece of technology -- or am at least familiar enough with it not to mess it up too badly -- I don’t want to change. I’m one of the few iPad owners who is actually happy that her device is too old to support iOS7 -- that gives me an excuse to maintain the status quo.

I’m bad at syncing, too. As a columnist for Tech Talk, these are probably not things I should admit, but there you have it. I sync my devices only when they start acting finicky and even then, I hold my breath, waiting to see if the sync is the fix I need.

I’m not opposed to change...exactly. The syncing (or lack thereof) issue has more to do with procrastination than an opposition to the latest technology.

But software updates -- like iOS7 -- are a different matter. What if I don’t like them? What if I can’t find stuff? Once I’ve already updated, there’s no turning back. Until I take that final step, I can operate in the dark (ages), sticking with what I know.

Fortunately, I live with a quick-draw updater. My husband loves following the news on the latest tech devices and formats -- in fact, I often think he should be the one writing this column. When an update comes out, he’s all over it, excited to see what new goodies await.

And so I let him lead. He jumps on the bandwagon, and tells me about the ride. Once I feel sufficiently prepared to tag along (usually after the bandwagon has slowed down), I climb aboard, a fine dust of apprehension still clinging to my heels.

As for iOS7, I’m still observing from the sidelines. I’ll climb aboard eventually, but in the meantime, I’ll follow the advice of those who suggest I let others -- like my eager husband -- work out the bugs.

How about you? Have you upgraded? What do you think?