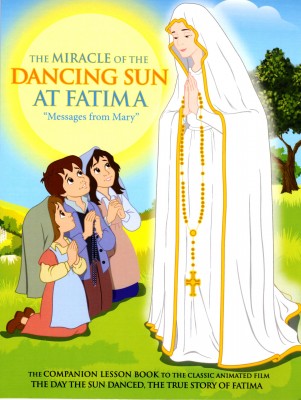 HANCEVILLE, AL, October 4, 2013 – Among one of his first acts, Pope Francis consecrated his papacy and World Youth Day to Our Lady of Fatima. On October 13, the Holy Father will consecrate the world to the Immaculate Heart of Mary, on the anniversary of the Fatima Miracle of the Sun.

To coincide with the pope’s observances of the Fatima miracles, the Fatima Family Apostolate will be announcing here in the U.S. a major global reading initiative to reintroduce the story and the lessons of Fatima to children around the world. The centerpiece of this initiative is a beautifully designed and illustrated story book and lesson plan, called The Miracle of the Dancing Sun, Messages from Mary. The book spells out in colorful detail the meaning and significance of the Fatima apparitions.

The Apostolate’s goal is to get a copy into the hands of every child in every religious education class around the world.

Father Andrew Apostoli of the Franciscan Friars of the Renewal and host of EWTN’s Sunday Night Prime believes the book “is going to really create images in the minds and hearts of children, and it’s going to stick with them for a long time.”

The book will be promoted and marketed along with the movie -- The Day the Sun Danced -- that was produced 20 years ago from a screenplay written by Father Robert Fox, founder of FFA, and is still much-beloved today by children worldwide.

The Fatima Family Apostolate has teamed up with CCC of America to ensure that children around the globe have access to the story and the lessons of Our Blessed Mother’s appearances before the three shepherd children in Fatima, Portugal in 1917.

“After hearing innumerable stories of how early Fatima teachings greatly helped people later in their lives, it saddened me to discover that our children no longer have this advantage,” said Michael La Corte, executive director of the Fatima Family Apostolate. “This program is in response to the urgent need to provide Fatima learning materials to parishes, religious schools and their students everywhere. I am excited that they can now benefit from Our Heavenly Mother’s plan for salvation and peace.”

Called “One Child – One Book – One Dollar,” this global reading initiative, funded solely through the generous support of its contributors, also marks the re-launch of the Cadets 4 Mary Program started by Father Fox almost 40 years ago. Through the decades, millions of Cadets made a personal commitment to Our Blessed Mother to pray daily and live the message of the gospels. This program develops virtues and fosters religious vocations.

“This project continues Father Fox’s legacy in a time when the children need it the most,” said John Preiss, president of the Fatima Family Apostolate International. “Fatima is a vital message of hope, values and virtues for all children throughout the world.”

During his May 13, 2010 visit to the Fatima Shrine, Pope Benedict XVI announced, “We would be mistaken to think that Fatima's prophetic mission is complete.”

“Fatima played a huge role in my own spiritual walk,” said Alan Napleton, president of the Catholic Marketing Network. “When I was a young boy, the good sisters taught us the Fatima story. Thirty years later, the profound impact of this teaching led me back to the Catholic Church. The “Fatima Book for Each Child” Program is important for our children and the Church.”

“Father Fox’s insight and love for children and Our Lady of Fatima brought authenticity to the movie that has captivated children around the globe,” said Karla Alfaro, president of the CCC of America.

CCC exists to produce and distribute engaging, high-quality entertainment with authentic family values. We use media to communicate faith-filled fun, wherein people can discover stories of real heroes possessing courage, love and truth. Presenting the goodness of man and the beauty of life, CCC of America has emerged with a better alternative – entertainment you can believe in.