Heads Up Charades: A Winner for Android Users

Maybe you saw that episode of Ellen where she showed off the iOS app Heads UP!? It's rocketed into popularity because it's a multi-player game for iPhone. There just aren't many other games like it.

To play, the player chooses a category from a list of pre-loaded options, and holds the phone up to their forehead, Indian Poker style. From there, pandemonium ensues. Even people who are turned off at the idea of playing a party game on someone's phone are immediately sucked in by the lure of shouting clues about which 1980s celebrity's name is currently displayed on their friend's forehead.

The problem is, for whatever reason, they didn't release a version for Android. This means that while it is a very fun game, you have to wait for one of your iFriends to show up to the party.

Several contenders have cropped up on the Google Play store, hoping to leverage the Ellen exposure to generate ad revenue from their suspiciously similarly named apps. 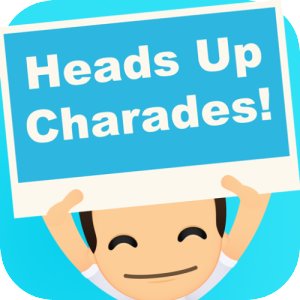 Out of the different options I've tried, a clear leader has emerged. The app Heads Up Charades! (as opposed to Heads Up!, which is obviously completely different) is basically the exact same game, right down to the typeface and color palate.

The play pattern is the same, too. You get 35 categories to choose from (as opposed to the real MacKenzie's 18), and once you pick one, you hold it up to your forehead, and you have one minute to guess what the phone says based on clues your friends give you. You tip the phone forward when you get the right answer, and tilt it back when you can't figure it out—pretty straightforward.

One significant place that the two apps differ is the price. The iOS game costs a dollar, a pittance really, considering that if it came in a box, Mattel would want $15. In exchange for saving the dollar, the player is greeted with an ad when they flip the phone back around to see what the clues they missed were. In my opinion, having to tap the little "x" in the corner is worth a dollar. Plus, It's always great to have a way to get a group of people looking up from their own phones and shouting "oh, you know this, the one with Mr. T and Face Man, and that awesome van! COME ON!!".

Have a favorite phone or tablet based party game? Share in the comments, I've got friends coming over this weekend, and it'll make me look like I'm ahead of the curve...