This post was posted in 2007 and in it Dr. Dobson mentions that our country will tip one way or another in the redefining of marriage. Well, it's 2013 and we have indeed tipped in the wrong direction with many states taking an affirmative stand for same-sex marriage and redefining it for the gay community.  How sad. And everywhere I turn, divorce, infidelity, and just plain selfishness have run rampant where commitment and marriage is concerned. 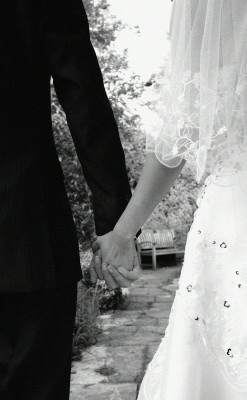 If not for the family and marriage, we would not have a future.  If we do not take care of this amazingly beautiful institution better, there will be no one to protect it in the future.  So, basically, our future depends on those of us fighting for traditional marriage and its protection, respect, and promotion.

Dr. Dobson helped me raise my kids. Let's face it, we all need a little help or coaching. I am not totally sure what his stand is on the Catholic Church, but he seems to be friends with us with what he did after JPII died and over the weekend.

After our beloved pope John Paul II died, he ran a special program about him and his contributions to the world...that was cool. More recently, he was a speaker, along with Cardinal Arinze, Archbishop Chaput, and others at the Legatus Fall Summit in Colorado Springs and has this to say to our Magisterium:

During a speech delivered on Friday morning at the Broadmoor Hotel in Colorado Springs, Dr. Dobson described how marriage, as the life long union between one man and one woman, is being culturally and legally challenged across the United States, and said that "the country will tip one way or the other (in favor or against the sanctity of marriage) in the next five years."

"At 71, the idea of retiring seems attractive to me, but I am being called by God to keep fighting," Dobson said.

"So that is what I am asking you to do today: don't give up in the fight for the sanctity of marriage, use your multiple resources to defend and promote the true biblical meaning of marriage and family," he told the members of Legatus.

Explaining that the defense of marriage brings conflict, and even the difficulties of "hate and name-calling," the founder and President of Focus on the Family compared it with working in a farm field all day long under the sun or in the midst of thunderstorms.

"Stay in the field, don't go back to the house, stay under the sun working hard, don't look now for the comfort of the shadow."

Truly, I hope men like him don't retire yet. There is so much work to be done, but we must take up the tasks as well, however, and learn from these leaders and be strong and protect what is right and denounce...strongly!!....what is wrong.

If not for us, but for our children!