Church Rescue: Trips to Other Worlds

The National Geographic channel offers exotic glimpses into foreign lands:  ancient Inca buildings in the Peruvian Andes, isolated pristine beaches just outside Hong Kong’s metropolis, the highland steppes of Argentina, and Protestant churches along the highways and byways of the United States.

Protestant churches?  Exotic and foreign?  They are if you are a cradle Catholic raised with the predictability of the Mass, connected through history and around the world as one. 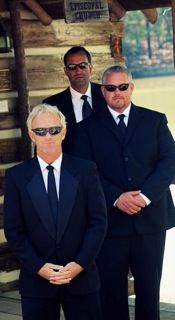 National Geographic’s new reality TV series, Church Rescue is featuring Protestant churches in need of extreme makeovers, from the physical building to the inner workings. The show features three consultants who are the “Church Hoppers”—a makeover business for struggling churches. A marketing specialist, a business analyst, and a spiritual counselor—take on Protestant churches (and one Jewish Synagogue) in need interventions.

For a lifetime Catholic, the first episode into a Baptiscostal church (a self-styled “Baptist/Pentecostal" mix) in Charlotte, South Carolina was as intriguing as a trip to another country.

Initially, I turned down the request to review it for a Catholic website.  After all, what do Catholics have to learn from a show about Protestant churches?  But after watching an episode, I realized that it could deepen the understanding of what it means to be Catholic through contrasting our Church with others.

I paired the Church Rescue program with another DVD: Understanding Sunday Mass: A Kid's Point of View, and watched it with my 11-year-old son. It became a sort of catechism lesson.

Larry Roseboro pastors the mostly African-American congregation of New Hope Church.  The four-hour services include music, praise, people collapsing to the floor after getting “slain in the Spirit,” and preaching as long as the pastor has more to say.  All without air-conditioning. Or a game plan.  “I don’t want to cut God out,” Roseboro explained. “We’re done when the Holy Spirit is done.”

The pastor’s dream was to move from his shabby church to a $1.4 million place of worship.  The Church Hoppers arrived one Sunday to evaluate and customize a business plan for success.  They improved the existing operation by helping the pastor organize and condense his sermons, beautified the physical building, and helped him formulate a long-range financial plan.  They also got Roseboro to bury the hatchet with a former deacon so the deacon would assist with the workload of running a church.

The show was entertaining and even inspiring.  Faith, a love of God, and the desire to spread the Gospel pervaded.

But what a contrast to the Catholic Church.  My son was fascinated by a Sunday celebration so different from our own experience: the singing and swaying and people slain in the Spirit dropping to the ground. (For the record, getting “slain in the Spirit” can happen at Catholic charismatic prayer services but not during a Mass.) My son’s eyes opened wide upon hearing of four-hour services compared to the hour-long Sunday Mass.

The Bapticostal pastor acts with passion and devotion but answers to no one except God. There is a hierarchy of bishops in authority over Catholic priests, even if the priest has the autonomy of running a parish. And bishops are under the Pope, descended directly from the line of St. Peter, the first Pope.  Sunday Masses are not self-styled or without a plan, but rather orderly beginning with song, including three Bible readings: a first reading, the Psalms, a second reading, and a Gospel reading.  There is an offertory where we offer ourselves, our donations, and the bread and wine, which will be consecrated into the Body and Blood of Christ during the Eucharistic prayer.  Every Catholic in good standing is invited to partake in the Eucharistic meal, which began at the Last Supper by our Lord Jesus Christ who commanded us to “Do this in memory of me.”

Of course, not all Protestant churches are like the Bapticostal.  With over 30,000 Protestant denominations, no two denominations are the same. There is no Church Rescue episode dealing with a Catholic church planned for this season. I think it’s unlikely to ever happen.  Catholic churches have remodeled and used consultants, but the worship service in every single Catholic Church is the same from throughout the world.

Catholics not understanding the descended beauty and history of the Catholic Mass are at risk of becoming ex-Catholics. To them, passionate pastors ad-libbing the service and adrenaline-charged congregations might seem more exciting than the quiet reflection and unity of worship in Catholic Churches.  We can admire and even emulate the good in people of other faiths, but watching their services should help us appreciate anew the uniqueness and solidarity of our faith.

Church Rescues is good TV: a problem, a solution, and a cast of Christians. But from the Catholic perspective, the rescues make only surface repairs.  A true rescue would reach all the way down to the apostolic roots.  That would be an extreme makeover indeed; one, holy, Catholic, and apostolic.

How about you? Do you perceive Catholic and Protestant churches as very different? Have you been to services from other denominations or are you a convert from another faith?