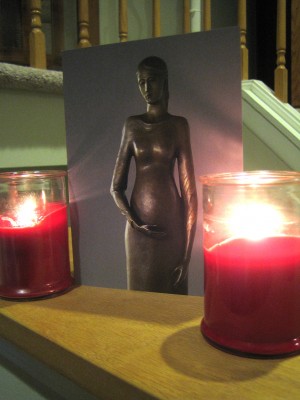 I was buried deep under the comforter, stomach churning, head pounding, when my husband came into the bedroom (after single-handedly battling bath and bedtime for our boys) and asked if I need anything – water? crackers? Quickly one hand shot up from under the blankets to brush away the mere mention of food.

“Sorry!” he apologized. “I didn’t know it was that bad tonight.”

But it was that bad, and it had been for weeks, and it would be for months. At least if my previous pregnancy track record proved reliable, baby #3 would keep me throwing up till Thanksgiving (if I were lucky) or Christmas (if I weren’t).

Of course we were delighted with the blessing of another baby, but all-day nausea was still a lot to bear cheerfully. I distracted myself in the darkest moments by counting down days till I might feel decent again, even though pregnancy is always unpredictable.

“Do you want to do evening prayer instead?” he offered in the general direction of where my head was hidden under a pile of pillows. I emerged with a tired “yes,” and he flopped down on the bed next to me.

Some nights I had been too exhausted even to split the prayer parts with him as was our practice, but tonight I mustered up enough energy to join him on the Magnificat at the end: My soul proclaims the greatness of the Lord…

Halfway through the prayer I could feel my stomach start to lurch. I closed my eyes to breathe through the waves and force the nausea back down.

That’s when it hit me.

In Luke’s Gospel, Mary speaks this canticle immediately upon greeting her cousin Elizabeth, who is also expecting. Mary has just received the shocking news from the angel Gabriel that she will bear a son, and Luke tells us that after the angel departed from her, “Mary set out and traveled to the hill country in haste to a town of Judah, where she entered the house of Zechariah and greeted Elizabeth” (Luke 1:39).

Later Luke adds the telling detail that “Mary remained with her about three months and then returned to her home” (Luke 1:56). From that, we might infer that Mary spent her whole first trimester with her cousin.

What does this mean for the Magnificat? Any woman who has experienced pregnancy can tell you: it was the prayer of a woman during a time of great change, hormonal turmoil, emotional ups and downs, and perhaps considerable queasiness. Wonder, joy, worry, and maybe even nausea to boot.

As I lay in bed, reading and listening to the words of the Magnificat, I imagined Mary and Elizabeth together. Exchanging words of awe and amazement, greeting each other with laughter and tears.

If Elizabeth was far enough along to feel the child leap within her womb, she was likely out of the morning sickness phase, perhaps comfortably settled within the second trimester’s glow. But she would still have recognized what might have been the telltale tiredness in her cousin’s eyes, the exhaustion of the newly pregnant. Maybe she sympathized with the nausea and sickness, too. Luke doesn’t include such details, but the time markers that he gives suggest that the timing of their visit was meaningful.

Of course, the Church doesn’t have an official statement on whether or not Mary had morning sickness. Theologians debated for centuries whether the nature of the Immaculate Conception meant that Mary, being without sin and its implications, did not experience pain or illness. But many a mother has found comfort in Mary’s maternity, and regardless of whether she was part of the sisterhood of the nauseous, her prayer during her early pregnancy is profound.

For the Magnificat is a hymn of expectations turned upside down. He has cast down the mighty from their thrones, and has lifted up the lowly. He has filled the hungry with good things, and the rich he has sent away empty.

These are theological truths about the nature of a just God, but they are spoken from the lips of a young woman who never expected to be pregnant before marriage, who never imagined her child’s arrival would be announced by an angel. Mary understood the upheaval of pregnancy on its deepest level, and so she could proclaim these prophetic words about God who defied the world’s expectations.

What I marveled about most, that night I tried my hardest not to get sick before we’d said our final “Amen,” was that the first words out of Mary’s mouth in the Magnificat are words of joy and praise: my soul proclaims…my spirit rejoices. In the midst of my present discomfort, were gratitude and grace my first impulses, too? Or did I start each morning instead with a pitiful plea to God to please let me not feel too sick today?

Maybe Mary knew morning sickness’s months of misery. Or maybe God mercifully spared her this added burden on top of the worry and fear and shame she might have endured at being pregnant before marriage.

But either way, Mary knew the unexpected upheaval that pregnancy always brings. And she let her heart turn this truth into a hymn of praise to God’s great blessings – the God who comes to the help of his servant Israel, who remembers his promise of mercy.

She could sing this truth loud and clear, no matter how she felt. Which is enough to inspire this pregnant (and still-sick) mama to try and do the same.

To discuss: What might the Magnificat mean for the way your own expectations have been turned upside down lately?