Do you know the story of the Prodigal Son? Here's my summary:

A man has two sons. The younger son asks his dad for his inheritance. (Basically, he was telling him, "You're dead to me. Just give me the money I'll get when you die.")

So the man gives his sons their inheritance. The younger son goes off to a faraway country and spends his inheritance on "loose living." (Yup. Just picture all of the seedy stuff that goes down in Vegas.)

There's a famine in the land, and the son ends up feeding pigs to get by. Eventually, he wises up and realizes his father's servants back home were better off than he was. So, he decides to head home, apologize, and ask to be treated like one of his dad's servants.

When his father sees him in the distance, his father runs to him, kisses him, and hugs him. The son apologizes and says he's not worthy of being called his father's son. (Basically, he's saying, "You should have disowned me, Pop.")

But what does the father do? The father asks the servants to dress his son in a robe, ring, and sandals, kill the fatted calf, and throw a party because his son "was dead, and is alive again; he was lost, and is found."

Meanwhile, the older, obedient son was working in the field. When he hears the party going on back home, he asks one of the servants what was going on. The servant relayed how his younger brother came back home, so his father decided to throw a party.

The older son becomes angry and refuses to attend the party, so his father comes out to invite him to join in the festivities. The older son tells his dad, "Really, Dad? Really? I did everything you ever asked me to do, and you didn't give me anything. Then, my little jerk of a brother comes home who was off spending your money on prostitutes, and you give him the party of a lifetime?!"

Instead of getting angry, the dad says to the older son, "Son, you are always with me, and all that is mine is yours. Let's celebrate! Your brother was dead, and is alive; he was lost, and is found."

Until I started to write this blog post, I never realized the parable heading in my Bible (Revised Standard Version--2nd Catholic Edition) is, "The Parable of the Prodigal and His Brother." I always just called it "The Prodigal Son."

As I get older, I'm starting to realize that the story is just as much about the prodigal son's homecoming as it is about his older brother's anger. Most of all, it's about their father's lavish love for both of them—even when they're acting like jerks.

I love the parable of the prodigal son and his brother, especially during the Advent season. In less than a month, we will celebrate Christ's birth. We will celebrate that God humbled Himself enough to take on flesh and participate in our humanity. What an extraordinary gift!

The prodigal son's older brother thinks things like, "Why am I giving up my seat for that family that obviously doesn't bother coming the rest of the year? We deserve that pew! We're here every Sunday!" With all of the standing, sitting, kneeling, hand motions, etc., etc., it becomes obvious who is a regular and who, well, isn't. The congregation's movements and responses become invitations for us prodigal son older brother types to pat ourselves on the back for participating with precision like soldiers in formation.

If you think you might be tempted to respond to these irregularities during Mass like the prodigal son's older brother, do what I (try my darnedest to) do:

Make the necessary preparations to ensure that you (and your family) arrive early to Mass so that you're not struggling to find a parking spot or seat. Get in some prayer time before Mass begins. Pray that God will humble you enough to see the ways in which you have acted like the prodigal son yourself. Then, thank Him for sending Christ to redeem "a wretch like me."

Envision the prodigal son's father. Picture his arms wrapped around his son. 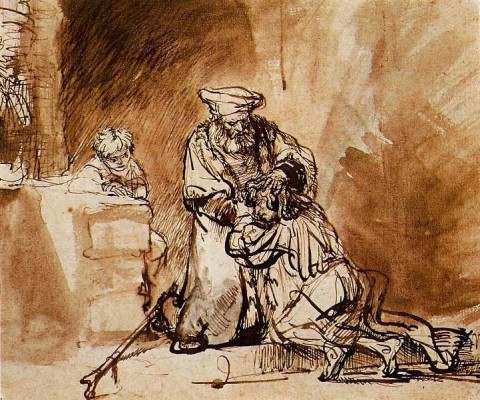 The Prodigal Son, sketch by Rembrandt

Then, picture Christ with his arms outstretched on the cross. 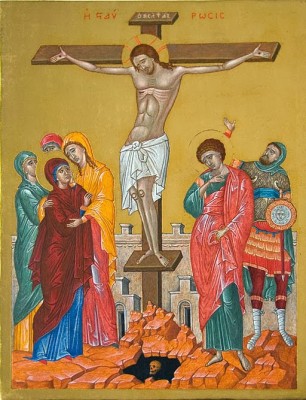 Christ came to redeem the world; not just the Sunday mass-goers.

Ask, "Could my behavior at Mass be an obstacle to my neighbor returning next Sunday?"

Instead of keeping mental note of my neighbor's behavior at Mass, shouldn't I be consumed with the miracle taking place on the altar?

Shouldn't I be drawing on those extra sacramental graces I am receiving and try to emulate the prodigal son's father?

Pray that your smile will somehow help them to come back next week.

If there's one of those handy booklets with the Order of the Mass, readings, and songs, open one up for your neighbor to help them follow along.

When I think about all of the people who have left the Church like the prodigal son left home, I think about the kind of reception our current Holy Father, Pope Francis, would give them upon their return.

Can't you see it? Pope Francis would have that awesomely larger than life smile, outstretch his arms in his white cassock and zucchetto. He'd give his prodigal son a big squeeze, take his face in his hands, and give him a big unapologetic kiss on the cheek. He'd say, "Jesus loves you, and I do, too." 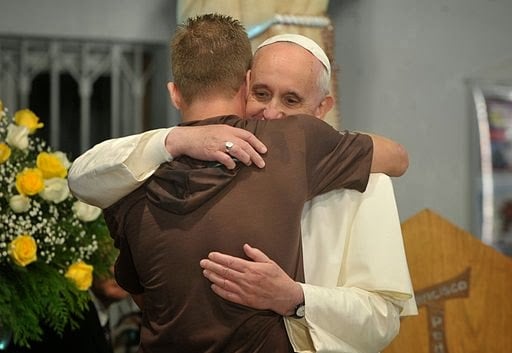 If we love God and choose His will, we are His always. Sound familiar? The prodigal son's father said to the older son when he refused to join the party, "Son, you are always with me, and all that is mine is yours."

The father chose to throw a lavish feast for his lost son that he thought was dead. Instead of joining the party, the prodigal son's older brother chooses to stay outside. I picture him working the field in the dark, stewing with resentment toward his father.

What can my parish do to extend a warm welcome to new faces at Christmas Mass? How can I welcome others?