The teaching of Latin has been my greatest downfall as a Catholic homeschooling mother. I know the importance of teaching it to my children, but I have a mental block when it comes to foreign language, especially Latin.

Knowing its importance, I haven’t allowed my lack of Latin knowledge create failure in my children. Over the years, I have sought out other resources so that my children could learn this rich, beautiful language successfully.

Part of being a good homeschooler is knowing when to seek outside help. If you are like me, that may mean finding a local tutor, using a tutoring service via Skype, taking a correspondence course, or signing up for a live, interactive course online.

Unless your child plans to major in the classics in college, two years of high school Latin study should be sufficient. All of the Catholic home study schools offer Latin in their programs. There are also a number of online curriculum providers who offer individual Latin courses, such as Carmenta Online Latin Classroom and Homeschool Connections. To find a private tutor, ask other Catholic homeschoolers in your local community.

Because emotions are contagious, consider learning Latin alongside your children. If they see that you are excited about learning, they will be more enthusiastic about learning themselves.

But why Latin? Why should you go to all that trouble? 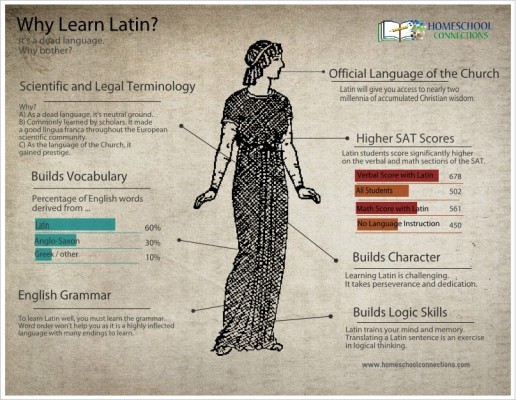 Here are the seven reasons I have my children learn Latin:

1. It's the official language of the Church.

As Edward Peters has stated, "A working knowledge of Ecclesiastical Latin affords one direct access to nearly two millennia of accumulated Christian wisdom"

Latin students score 160 points higher than non-Latin students in the verbal section of the SAT. They also have significantly higher scores in math. An investment in Latin can translate into college scholarships!

Learning Latin can be challenging. It takes perseverance and dedication.

At least 60% of words in the English language are derived from Latin, often through middle French, 30% of English words are of Anglo-Saxon origin, and 10% from Greek and other languages.

Did you know that most, if not all, of the 206 bones in your body are Latin words?

To learn Latin well, you must learn the grammar. In Latin the word order won't help you, as it is a highly inflected language with lots of endings to learn.

Latin trains your mind and memory. Translating a Latin sentence is an exercise in logical thinking.

As you can see, Latin is an important subject. While it is rarely taught in site-based schools these days, I think these seven reasons point to why that needs to change. I hope that, if you aren’t already, you’ll introduce Latin into your homeschool.