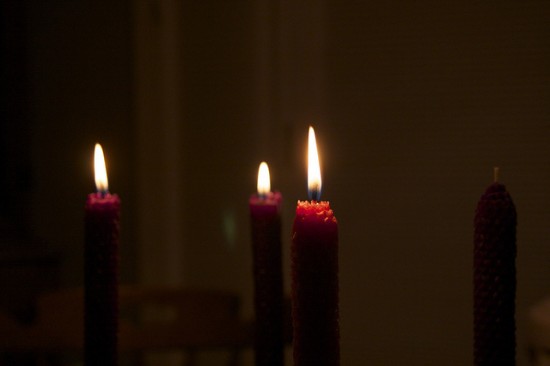 Moses’ mission had taken him quite a distance . . . from the splendor of Pharaoh’s palace, to a stroll through the Red Sea, to wrestling with Israel’s stubbornness for forty years in the desert. How sad that he never made it across the Jordan!  But God did give him a moment of consolation.  He brought him up to the top of Mount Nebo and showed him the Promised Land.

John the Baptist had a similar mission.  He proclaimed the imminent coming of the Kingdom and labored tirelessly to prepare the way.  Yet, on a Sunday that is supposed to be about joy, we find him locked in a dismal dungeon, awaiting execution.  He sends a message to his cousin, looking for some shred of hope.  “Are you the one who is to come?”

The message sent back to him no doubt made excitement surge throughout his weary bones.  The prophecy of Is 61 had been fulfilled: the blind see, cripples walk, lepers become clean, the dead are raised, the poor hear good news.  This can mean only one thing . . . the anointed one, the messiah, has come!

But though John had seen the anointed one and heard of his wonderful works, he, like Moses, did not enter into the Kingdom during his lifetime.  This is the meaning of the puzzling words of Jesus: “History has not known a man born of woman greater than John the Baptizer.  Yet the least born into the kingdom of God is greater than he” (Matthew 11:11)

John only caught a glimpse of the first light before sunrise.  For the dawn from on high would not break upon the world until Easter morning.  The birth of Jesus, his teaching and even his miracles were but a preparation for the Kingdom of God, for the righteousness, peace, love, and joy that could only have been made possible by the Messiah’s death, resurrection, and sending of the Spirit.

Who is greater than John?  The little baby who is incapable of doing very much at all, but who through the saving waters of baptism, is born into the Kingdom of God (John 3:5).  This baby is born not of woman, like John, but of water and the Holy Spirit.  The greatness of this baby is a pure gift of God’s grace, the gift of being an adopted child of God and temple of the Holy Spirit.

It is good to pause a moment and think about the difference made by Christ’s first coming . . . Old Covenant vs. New. . . works vs. grace . . . written law vs. the law of the Spirit . . . liberation from Pharaoh vs. liberation from Satan . . . an eye for an eye vs. the Sermon on the Mount.

It is also good to pause a moment to remember the difference between His first Coming and his Second . . . mortality vs. immortality . . . the darkness of faith vs. the beatific vision. . . the valley of tears vs. unending joy.

While Christ’s first coming transformed the meaning of suffering, it did not banish it.  His Second Coming, however, will!  At the sight of him riding upon the clouds, “sorrow and mourning will flee.”  (Isaiah 35:10)

Yes, we have been saved.   But we have not yet fully taken possession of our salvation.  We have tasted the first fruits, we have received the down-payment.  But the rest is held for us in trust.

The confident anticipation of this inheritance is known as hope.  This unsung hero among the theological virtues is terribly important, because it makes patience possible.  You can endure hardships cheerfully (James 5:7-10) only when the anticipated reward makes it all worthwhile.

Hope is also important because it is the key to joy.  And that’s why the third Sunday of Advent is known as “Gaudete” or “Rejoice” Sunday.  The vestments change from penitential purple to rose because the suffering of this present age is as nothing compared to the glory that is to be revealed to us.”

Moses rejoiced on Nebo.  John rejoiced even in chains.  In the midst of this valley of tears, let us Rejoice in Hope (Romans 12:12).