A Look at a Christmas Classic: The Nutcracker

Almost everyone is familiar with The Nutcracker Ballet by Pyotr Tchaikovsky, which tends to make its rounds during this time of year.  It is a fanciful tale of Clara, her Nutcracker, and their brave fight against the Mouse King and then their journey to the Land of Sweets where they are delighted by an array of music and dancing.

The ballet has touched millions of lives and has gone through many iterations since its first production in 1892.  It has become an Advent and Christmas staple for many.  The problem is, the story in the ballet pales in comparison to the original story which it is based upon. 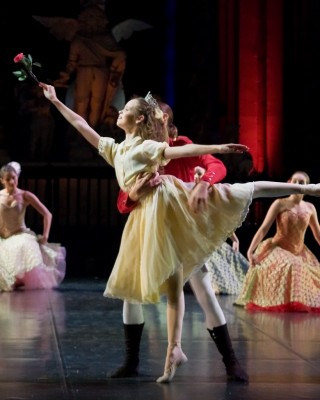 The Nutcracker and the Mouse-King was written by German author ETA Hoffman in 1816 and was the inspiration for the Tchaikovsky ballet which most are familiar with.  An adaptation/revision was written by Alaxandre Dumas in 1844 which was later used to construct the ballet.

The origin story itself has been lost to many, who simply believe that the ballet was where the story came from. So I endeavored to read a translation of the book, which is in the public domain, in order to receive the real story, and let me tell you, it is not the song and dance wonder that the ballet is.  The original children's story is darker, more detailed, and completely puts the ballet to shame.

First off, in the story version, the main character's name is Marie or Maria, not Clara.  She is a girl of seven, who, at the beginning of the story, waits with her older brother Fred/Fritz as their parents prepare the grand Christmas celebration.  They especially anticipate Godfather (not Uncle) Drosselmeyer's gift to the family as his gifts are always grand and innovative.

The rest of the first part of the story plays out almost exactly as it does in the ballet.  Marie discovers the Nutcracker on the gift table and takes a liking to it.  Her father says that the gift is for the whole family but that she will have charge over the doll.  Fred, her brother, whether accidentally or on purpose, ends up hurting the Nutcracker by trying to break a nut that was too large.  Marie bandages the doll and puts him in a glass case, staying up with it after everyone else has gone to sleep.

This is when the Mouse King and his legion show up.  The Mouse King has seven heads!  Marie, taken aback by the onslaught ends up breaking and stabbing herself with a glass shelf, at which point the Nutcracker comes to life, springs into action, and rallies the toys in a fight against the Mouse King's forces. The Nutcracker's side begins to lose, and just as the Mouse King is about to attack the Nutcracker, Marie throws her shoe and knocks the forces of the mice, and their King back.  Although, the book's description of the fight is so much more amazing and alluring than anything which could be presented on stage.

That is where the similarity with the ballet stops, and a much longer and intriguing story begins.  Marie wakes up in her bed and has a long recovery from the gash she suffered in her arm the night before.  During the days of her recovery, Drosselmeyer tells her the story of how the Nutcracker came to be.

This story is fully omitted from the Ballet and I have never seen an accurate rendition of it in any TV special.  Of course, Drosselmeyer tells it only as a story but, Marie knows that he is speaking in truth, not in fantasy.  I will not ruin the story by giving a full synopsis here.  Needless to say, it adds a whole new dimension to the tale of Drosselmeyer, the Nutcracker, and the Mouse King. Drosselmeyer fixes the Nutcracker and the doll is placed back on one of the glass shelves in a cabinet in the main drawing room where the Christmas celebrations had occurred.

Shortly after this, the Mouse-King shows up at night in Marie's room and essentially blackmails her!  The King threatens to bite the Nutcracker to pieces if Marie does not give up her sugarplums and gingerbread.  So she does, sacrificing something precious to her for the sake of the other.  The Mouse King repeats his blackmail again on another night.  Finally, Marie speaks with the Nutcracker who manages to come to life long enough to tell her he needs a sword.  Marie's brother Fred finds one and ties it to the Nutcracker who finally slays the Mouse King.

This is where the Land of Sweets comes back into play so, it would seem we are back on track with the ballet, right?  Nope, not even close.  Forget the ideas of a Sugarplum Fairy,  Russian Candy Cane dancers, or Arabian Coffee Dancers.  Hoffman's Land of Sweets is much more beautiful and awe-inspiring.

There are meadows with almond and raisin bread gates, towns of gingerbread along side a molasses (or honey based on translation) river, and a grand castle made of glass.  There are people and creatures made of sugar, others that are mechanical, and still others which are doll-like.  The vivid descriptions Hoffman uses are perfectly designed to fire the young imaginations of boys. girls, and adults alike.  Sure, there are some scenes of dancing but the descriptions of the land itself are what make this part of the story a true marvel.

However, the story then separates again from the ballet, when Marie awakes in her bed.  She tells her parents the story, as well as Godfather Drosselmeyer and they all laugh at her.  That being said, the ending of the story is much happier than the ending of the ballet.  Again, I will not spoil it in this review.  Readers will just have to explore the story for themselves and find out if Marie and her Nutcracker will ever be happy together.

While there are some scary scenes in the book, and it is significantly darker than the ballet, it is still a great story of sacrifice and of wonderment.  I would suggest it for reading out loud to children of almost any age, unless a parent feels the child might be too sensitive to the idea of battles, bleeding, and the idea of a 7-headed Mouse King.

I will also mention that the book is in the public domain, which means it is available for free online.  While the translation I read wasn't perfect and had some additional letters or spelling issues due to digital conversion, it is still a great rendition.  There are some words which are not used in modern English, and while this could be a stumbling block, it really adds to the feeling of the book.

To the men out there who have been forced to suffer through either seeing the Nutcracker ballet on stage or on TV, this book is your salvation.  Trust me when I say that the book has plenty of action and a great plot.  I mean, a 7-headed mouse blackmailing a 7-year-old girl out of her candy should be enough to create a fire in any man's belly.  You WANT that evil Mouse-King to get it in the end because the creature is so vile.

The Nutcracker and the Mouse King is a great read and is fairly short as well.  The book can be read over a period of a few evenings to children without much difficulty.  The chapters are relatively short, and an adult could read it cover to cover in an hour or so.  It is a great way to get into touch with the true roots of the Nutcracker and to be exposed to a much richer fantasy world.  I highly recommend that anyone familiar with the ballet read it.

Find The Nutcracker and Mouse-King by ETA Hoffman, translation by Mrs. Saint Simon, for free in downloadable formats on Archive.org.