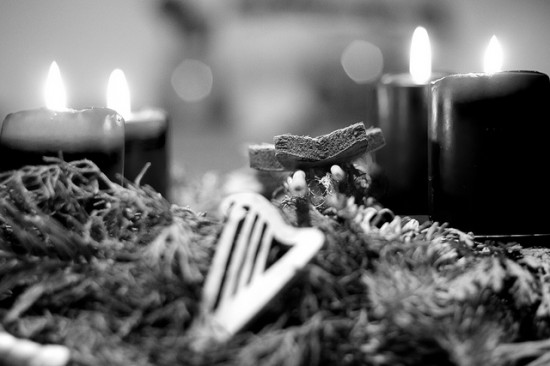 Pope Francis surprises us in many practical ways. He also is aware of how to help us appreciate the person of St. Joseph. Shortly after his election, we learned that the Eucharistic Prayers should contain the following after the mention of Mary…”and blessed Joseph her spouse.” Thus at every Mass we recall St. Joseph.

I found that the readings and response furnish a good sketch and background for the person of St. Joseph as we begin the Fourth Sunday of Advent and have just two days before Christmas after today. The Christmas scene would not be complete without his presence. The readings attest to this in the way they describe the messianic promise through David and his lineage in the kings of Judah. Joseph is definitely from the birth records that stem from David down to Joseph’s name in Matthew 1:16: “Jacob was the father of Joseph the husband of Mary. It was of her that Jesus who is called the Messiah was born.” (Matthew 1:16).

In one of the oldest texts used by the Fathers of the Church in their Christmas homilies we discover that Isaiah 7:14 as found in the Gospel of Matthew in verse 23 is also a Davidic text because of Ahaz who belongs to the royal lineage of David and is mentioned in the birth record of Jesus in Matthew. In the context of today’s Gospel it is both a Christologcal and Mariological insight on the part of the inspired writer. The King James version retains the word virgin in translating the text of Isaiah and our liturgical reading retains it both when Isaiah is cited and when the text is given to us by Matthew as it is today. He used the Greek translation of Isaiah 7:14 (Septuagint or the LXX).

Psalm 24 is an entrance psalm as one approaches the Temple or the dwelling place of God. It is attributed to David and in the context of our Gospel for today it helps us to learn how a righteous man or a devout man like Joseph is described.

Romans 1:1-17 also has mention of the royal messianic entitlement of Jesus as a son of David according to the flesh. In verse 3 we read:”who was descended from David according to the flesh.” We may ask then how could Joseph be involved since he had no relations with Mary prior to nor after the birth of Jesus? According to the law and culture of the first century, one who named and claimed the offspring of a woman was declared the legal and real father of the child. They had no hang-ups about this and in the rest of the Gospels we learn that Joseph is always considered by others as the son of Joseph the carpenter and Mary was the child’s mother.

In the most beautiful passage about Joseph, that is, in today’s Gospel (Matthew 1:18-25) we learn of his sensitivity to how God speaks to him even in his dreams and thus makes a decision to take the child, name the child, and protect the child and his mother. The passage is my favorite for Advent. It contains so many meanings as the verses unravel the mystery of the name Jesus and the great name taken from Isaiah 7:14 Immanuel or “God with us.”

In the days in which Joseph was married to Mary we learn their were three stages: “The first stage was the engagement. That happened when a boy and girl were very young and it was done by their families. In those days, marriage was too important to the feelings and vagaries of the human heart. The parents made the engagement. The second stage was the betrothal. Here is where a couple accepted and ratified the engagement their parents made. They could leave before the engagement but to separate after the engagement required a formal legal procedure. A year later came the solemn marriage, which was final. Joseph and Mary were at the middle stage where Joseph is told not to fear about taking Mary as his wife. That is the background for today’s reading.”

“Joseph was a man of commitment. He truly loved Mary, would not subject her to the demeaning divorce process and was ready to separate quietly. He was reassured, however, by God’s word and never looked back. He was committed to Mary and to Jesus.” (Fr. S. Joseph Krempa).