This is going to be a little stranger than usual, though there are a lot of video game memes involved. Step one, start the game as a powerful character. Then the character is downgraded for purposes of the plot, and has to face down a set number of enemies before the inevitable plot reversal. The character will be regaining all of the lost abilities as the game progresses. If it sounds familiar, that's because it's almost every other video game.

In Darksiders, the player plays War, horseman of the Apocalypse. War has been framed for prematurely causing the end of the world. De-powered and sent back to an Earth a hundred years later, War is out to stop the demons who set him up. In order to get to the main villain, War must fight four major demons, gaining back his old powers along the way.

I said this would be a strange one. 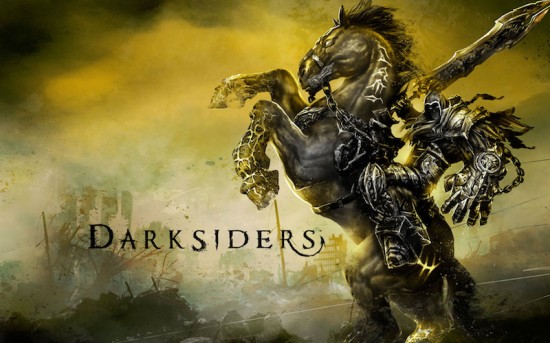 If you take a hack and slash mechanic reminiscent of Devil-May-Cry, and combined it with three-dimensional puzzles similar to Prince of Persia, you have a fairly good idea of how this game goes. The actual game mechanics when using weapons and maneuvers feels like a beta for Batman: Arkham City -- different combinations of buttons lead to different maneuvers, though it's a little hard to manage when (on the Xbox) pushing the left stick, pressing the right bumper and X at the same time is different from just the right bumper and X, but if you press the LEFT bumper and X, you use a consumable item....

The music is all right, albeit barely noticeable during game play. The graphics are above average, though there are some moments where they are quite pretty. Usually, that's when we have angels on the screen, who are beautifully rendered, but you can understand an opening line of "Be not afraid." These are angels you don't want to meet in a dark alley.

Where does one start with this game? It's not that the gameplay is overly violent ... okay, it is a little, but it's the sort of violence that would pass the early comics code. "Blood" spurts from demons killed, but most of the time, it is a pixelated black cloud that makes you wonder if demons are run on motor oil. Even dismembering demons feels more like smashing apart robots.

You might be wondering a bit about the plot. How can a horseman of the apocalypse be framed for anything? Well, in this case, the horsemen are supposed to be the armed wing of "the Charred Council," mediators in the war between Heaven and Hell.

Where does God enter into this? He is decidedly not mentioned. The game shows angels versus demons, with humans in the middle, and you wonder exactly what the bloody blue blazes is going on. I don't think it's morally confusing, but generally confusing if you put too much thought into it. The world itself is a bit of a hodgepodge of religious imagery that probably sounded good to the designers.

Also, War is tasked to make deals with demons in order to progress in the game. This isn't necessarily a moral problem, since it's obvious that, yes, evils are waging war on other evils, and they're all out for themselves. In these cases, it's obvious that War will be stabbed in the back by these folks; it's only a matter of time. The angels, at least, are on the side of good, though they're targeting War because they think he's the bad guy.

I don't see it. The puzzles are so frustrating at points, I nearly give up on the game. I might go through it once more on the premise of "oh, the heck with it, just because I know the solutions already," but that's it. And there will be moments where you wonder "wait, how does this make sense, in retrospect?"

There are moments where gameplay is sketchy: sometimes War doesn't lock onto the correct target, and some of the puzzles players have to go through are unclear. There is a lot of backtracking, and almost no guidance in the maze-like caves and castles; in fact, the character created precisely to be the guide (voiced by the Joker, aka Mark Hamill) is almost useless.

ESRB Rating: M for Mature - Which is strange. The language is fairly tame (what there is of it), and the violence is described above. The ESRB also cites scantily clad women in the game, even though there's only one woman in the cast, and she's in full battle armor (see picture of Uriel).

My Rating: It's a PG-13 game, with a quality of 7/10, an above average game. Fun, with flashes of ingenuity and creativity, but frustrating at times. And the plot is a little thin.