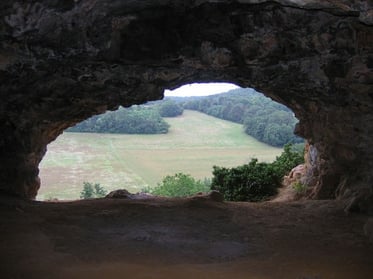 When I speak with someone who is curious about the faith, I realize my revelations about the spiritual life in the Mystical Body of Christ are completely foreign. I might as well be a fantasy character explaining life in an alternate reality a reality outside of their own personal cave.

The worst possible fate for me would be to die and discover that I had lived an existence similar to the allegory described in Plato’s Cave. Plato describes man’s condition similar to living in a cave, chained, only seeing shadows on a wall cast from a candle. Yet the human race believes that this is all there is to life. When one person manages to break free and stumbles out into daylight, he realizes that what he thought was real were actually shadows of real objects. After this messenger makes his way back into the cave to explain this revelation of the real world to the cave dwellers, no one believes him. No one else has any reference point; they simply cannot grasp this alternate reality outside of their cave.

When I speak with someone who is curious about the faith, I realize my revelations about the spiritual life in the Mystical Body of Christ are completely foreign. I might as well be a fantasy character explaining life in an alternate reality a reality outside of their own personal cave. Psychologically speaking, people need to hear a completely new concept at least three times before it even begins to register in their minds. Sharing about spiritual reality is like helping God make new neurological connections and this transformation takes time. Seekers who have existed on the surface, experiencing only physical reality are wearing God-filtered glasses; the life in Christ that I share with them is completely alien. They have no reference point, just like those who lived in Plato's cave.

That said, slowly sharing my conversion story, epiphanies and inexplicable miracles in my life tickles people's curiosity and opens their spirit to the Holy Spirit. I always remind myself that it is the Holy Spirit who knocks on the door of a convert's heart; I am simply an open window, a landing strip, an antenna that connects the power of God to the earth.

The allegory of the cave explains the problem Christians face when they try to explain life in the Spirit. The spiritual life ultimately cannot be taught. The light of God must be experienced, passed on like a living flame. Christianity is all about a living, vital relationship with Christ, not merely intellectual knowledge. Christ brings man into a relationship with God once again by the power of His death and resurrection:

And I heard a loud voice from the throne saying, “Behold, the dwelling place of God is with man. He will dwell with them, and they will be his people, and God himself will be with them as their God. (Revelation 21:3)

The Catechism of the Catholic Church expands the importance of a vital, living relationship with God.

A Personal Relationship with God (2558)

The Church professes faith in the Apostles Creed (Part One) and celebrates faith in sacramental liturgy (Part Two) so the faithful might conform to God's will in the Ten Commandments (Part Three). To believe, celebrate, and live this mystery demands a personal relationship with the living God through prayer (Part Four). "Prayer is a surge of the heart, a simple look toward heaven, a cry of recognition and of love, embracing both trial and joy" (St. Therese of Lisieux).

Christian prayer is a Covenant relationship in Christ, springing from the Spirit and ourselves and directed toward the Father in union with Christ's human will.

Prayer is the living relationship of the children with the Father, Son, and Spirit. The Kingdom is "the union of the entire Holy Trinity with the whole human spirit" (St. Gregory of Nazeanzus). Prayer is the habit of being in the presence of the Trinity.

As for me, I need God to continually break chains and lead me of my self-crafted cave into the SonShine. I need to live in reality. I refuse to play games, wear masks and costumes to fit into a false persona which I have crafted in my own mind. To live in truth means discovering my true self at my core, in the ground of my being. The longest journey is from our heads to our hearts. It is a silent journey within. As Catherine De Heuck Doherty (founder of Madonna House) said,

Christianity is a heart to heart relationship, not merely an intellectual exercise or a matter of fulfilling tradition  the law.

How would you communicate the message of salvation and  the subsequent new life in Christ with the unchurched, with people who have no Christian frame of reference or Christian vocabulary?