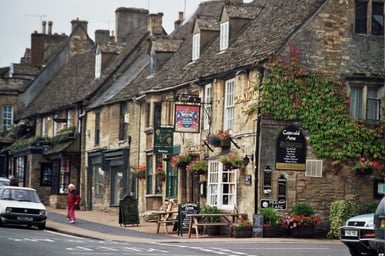 When I was growing up, our family somehow got into the habit of singing before dinner.  Don’t ask me how it got started.  It was probably Michael or Ruth, those two could always be counted on to bring the zaniness.  But whoever it was, however it happened, our family meal time got to be a regular dinner theater.

I should clarify that I’m using the term “sing” here rather loosely.  We weren’t exactly the Mormon Tabernacle Choir.  More like an Irish Pub.  Late at night.  When people are loud and rowdy.  And everyone who can actually sing has already gone home.

I think it was probably Mom’s “Rules of Dinner” that fostered the birth of our storm of song and allowed it to grow into the great vocal vortex that preceded our meals.  These weren’t the rules about manners, they were rules Mom devised to encourage appreciation for the whole dining experience she had labored to provide—or at least to slow us kids down enough to actually taste the food she’d made while we inhaled it.  And now that I’m a parent myself and do the cooking for my own little troop, I totally understand.  What parent hasn’t encountered the phenomenon of spending hours cooking, setting the table, filling all the little drink cups, and finally sitting down to eat, only to have the children descend like a swarm of locusts, rending and devouring, stripping the table clean of food in seconds flat before buzzing off again in a high-pitched cloud of mayhem searching for its next locus of destruction.

Thanksgiving and Christmas Eve are the worst.  Half a day spent in the kitchen preparing a huge turkey or ham, along with dozens of side dishes, barely keeps the kids at the table ten minutes before they’ve consumed everything and scampered off again leaving a wasteland of crumbs and half-empty milk cups in their wake.

Well, my Mom had to deal with all this on a much grander scale than I, since she had more than twice as many kids as I—plus she had Mark and John to contend with, each of whom has a stomach capacity that’s practically a wonder of nature.  They eat like wild bears just waking up from a winter’s hibernation—and they’d probably eat a wild bear whole if they could get enough tabasco sauce to go with it.

So Mom decreed the following for our family dinners:

1.  Everyone must come to the table when dinner time is called.  She wanted everyone eating together at the same time, not grabbing food as they migrated through the kitchen or dining room while she was cooking and setting the table.

2.  NO SNATCHING.  Everyone had to come to the table:  but you had better not touch so much as a dinner roll until we had prayed and all the food had been passed around, making a complete circuit of the table at least once.  This rule was taken very seriously, as we all had to work together to hold the line against Mark and John, or entire pork roasts would disappear before the rest of us had a chance to savor more than a fleeting hint of their succulent aroma.

3.  You must SWALLOW ONE BITE BEFORE TAKING ANOTHER.

4.  For perogies, which take a really long time to make, and are really good, you also MUST CHEW EACH BITE AT LEAST THREE TIMES and intone “Mmmm” in an appreciative manner with each chew.  Onerous regulations, but for perogies, it was worth it.

5.  No one is allowed to leave the table until everyone is done.  This rule Mom actually relaxed because of Rachel.  She was the youngest and skinniest of the kids, and she nibbled her way through every meal with the tiniest bites possible.  She would drive us crazy!  I think she used tweezers instead of a fork.  She could stretch a single McDonald’s hamburger into an hour long meal.  Funny, now all these years later, she’s still the youngest, still the skinniest, but now she’s got 4 kids of her own (aged five and under) and a black belt in karate.  She breaks boards and bricks—concrete blocks even—with her bare feet and hands.  So we don’t give her a hard time about how long it takes her to eat anymore—at least not when we’re within range of a flying roundhouse kick.

And finally, the last and most important rule:

6.  You MUST TELL MOM HOW DELICIOUS THE FOOD WAS when dinner is over.

These were really Mom’s rules, and they were really and truly enforced—albeit with tongue in cheek (except for the no snatching rule, if you violated that we’d sick Rachel “Fists of Fury” on you), but sort of seriously too.  We really came to the table when dinner time was called, and we really said “Mmmm” when we ate perogies, and after dinner Mom would really say:  “What’s the rule?” and we’d pipe up:  “That was delicious, Mom!”  And I think it was these rules that created the conditions necessary for our dinner theater to grow and flourish.  Thanks to Mom’s rules, there was a time each evening when we were all sitting together at the table, with nothing to do but wait and anticipate.  It was into that vacuum of enforced non-eating idleness that song came to our table.

We sang all kinds of songs, everyone contributing selections in their own preferred genres, and some came to be recurring favorites.  Like “Oh What A Beautiful Morning,” and we’d really ham up lines like:  “The corn is as high as an elephants eye . . .”—with warbling falsettos kicking in on “eye,” before plummeting into the basement for Grand Canyon deep:  “. . . and it looks like it’s growing clear up to the sky!”  “Oklahoma” was another hit, mostly because of the chance to yell “HEY!” followed by “Yip-i-yo-I-ya!”

Or “Goodnight Sweetheart, Goodnight,” where Michael and Rachel worked out a special duet.  Michael would hit the bass lines, “dho-dho-dho-dho-dho,” deep and low, and then Rachel would come in with her little-girl soprano, “Goodnight sweetheart, goodnight!”

Over the years, some meals even got to have their own theme songs, like beef roast with gravy, which was always met with several rousing rounds of Joe Diffie’s country classic “Good Brown Gravy!”

Those meals were fun, and the singing was just the beginning.  When it was time to say prayers, Dad would knock on the table, which was the signal to hush up, and when quiet descended Dad would open with “In the name of the Father . . .” and we’d all join in, everyone together making “a voice as big as the seas.”  After prayers, we’d start passing around serving bowls and swapping stories.  You had to be quick to keep up with that company, jokes and witty repartee crackled around the table like lightning, with everyone vying to garner the biggest laughs.  There was also plenty of politics and history discussed, recounting of events from the day, and lots of family lore.  All the while the peanut gallery would be chiming in with one-liners, keeping the congregation rolling with laughter.  And it was always positive.  The jokes were never the carping complaints or personal attacks that pass for humor in so much of modern media.  The tone and tenor was upbeat, encouraging, can-do.  We were there to support each other, as well as have a good time, and we all knew it.

After dust settled and the table was cleared there would always be two or three of us who’d linger with Mom and Dad to hear more stories as they drank their after-dinner coffee—plus Rachel, who would still be working her way through the main course.  They weren’t just meals, they were events, and we got to enjoy them every night.

It wasn’t until years later that I realized I’d learned the secret to fine dining during those rowdy family dinners:  it’s joy.

It took me so long to see it because for years I’d confused dining with the dinner, when it’s really more about the diners—more about who’s around the table than what’s on the table.  But in the years after leaving home, I found myself sitting through my share of business dinners with people who didn’t really care for each other, but were bound together by a common enterprise for gain.  Or worse, there were the dinners with people whose only bond seemed to be a mutually shared animosity:  they were all gnawing the same bone of contention and none would let it go.  Some of those were sumptuous dinners in fancy, expensive restaurants, but I didn’t enjoy them.  The tension was thicker than the fillets and the acrimony crustier than the Crème Brule.  I didn’t even really taste the food, let alone enjoy it.

And while Mom’s meals were far from “a dish of herbs,” it was the love that made those dinners something special, so special that even decades later I can still remember them, and they still bring a smile to my face.

It’s a good reminder for us parents to keep our focus on what really matters.  We don’t need fancy meals (or cars or houses or anything else).  “Gladness of heart is the very life of man,” and “One who is cheerful and gay while at table benefits from his food.”  Sir 30, 22, 25.  A “joyful heart is the health of the body,” Prv 17, 22, and the things of joy which make life “a continual feast” for “a light hearted man” (Prv 15, 15) are available to all of us—and we can give those things to our children, whether we serve them up with humble but venerable old mac & cheese or prime rib on a silver platter.  The food is the side dish, and it doesn’t matter so much what it is:  the love is the main course, and, as we used to sing at our dinner table, “there ain’t nothing like the real thing, baby.”

Progressive Dinner: Roasted Sweet Potatoes with Scallions
Read
Nothing to Watch But Everything to See
Read
A Dreamy Dinner Out
Read