Knowing When to Step Down from a Ministry or Apostolate

One of the best ways to feel at home in a parish is to become immersed in the activities of the parish and join some of the different ministries. About 14 years or so ago, Mr. Pete and I decided to truly dive into parish life and joined a few ministries.  We both sang with one of the choirs, I was a lector, and Mr. Pete taught PSR. What we truly longed for was a ministry that we could do together, and so we decided to become part of the Pre-Cana team.

Pre-Cana is part of the marriage preparation program in the Catholic Church. It gets its name from the Wedding Feast in Cana, where Christ performed his very first miracle of changing water into wine. In the Diocese of Cleveland couples are required to attend a Pre-Cana Day or other marriage preparation before they can be married in the Catholic Church.

At our parish, a date close to St. Valentine's day is chosen for Pre-Cana day.  Couples are treated to a nice lunch and a wedding cake for desert.  Before and after lunch they listen to  talks on marital topics that are supposed to be presented in light of Catholic teaching.  These talks are given by couples from the parish who have given of their time and talents to share their insights and experience. The day ends with a very nice candlelight prayer service at the church. 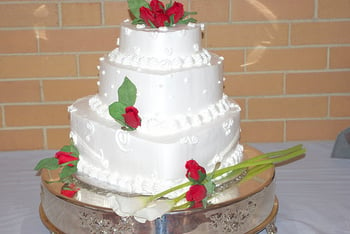 Back in 2000, Mr. Pete and I started out as helpers.  We set up the hall and helped with whatever was needed during the day.  Our big opportunity to help was during the "trust walk" where one half of each couple was blindfolded, and lead through the school hallways by their partner.   Our job was to keep anyone from getting hurt. It was fun and we enjoyed it a great deal.

But in 2004, there was an opening for a couple to give the Marriage as a Sacrament Talk, and we jumped on it! We faced the challenge and were speakers for the first time that year.

I think our goals were:

The hard part was actually putting the talk together and deciding what was important to include and what we should leave out.  We both felt strongly felt that to be authentic and true we had to include scenes from our own marriage.  We based this on talks we had listened to as we reverted back to our Catholic faith and also many talks we had listened to about homeschooling.  The talks that inspired us the most were always the ones that brought in personal examples and experiences, and we knew that to be effective, we were going to have to do that too.

So we included examples of when we had certain physical problems, like pregnancy or oral surgery, and also some sad times in our marriage, like the death of our stillborn son and the passing of our parents. These personal events were indeed a challenge to share with a room full of strangers, but we always hoped that what we shared would help them at some point in their own marriages.

The first year was probably the most time consuming as we put the speech together, but every year after that we would tweak it, make it more up-to-date, and include different things we had heard or read during the year.  And we always practiced the speech for a few days before we actually had to give it! 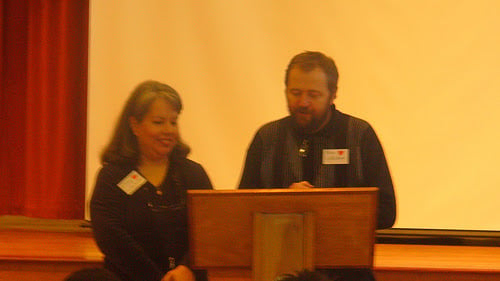 We were so focused on giving a good witness and helping these couples to have successful marriages that sometimes their reaction to our efforts sort of blew us away!  I can remember one time a young lady came up to me and said that she wanted my opinion about something  I quickly said a quick prayer for wisdom, smiled, and then said that I would be glad to help if I could. Turned out she wanted to know whether I thought she should have a band or a DJ at her wedding reception!

I don't even remember what I told her, but that incident reminded me that we were talking to people who were at the very beginning of a long path, perhaps at the bottom of a steep hill, who had NO IDEA of what they were actually getting into!  This gave me an entirely different perspective in the years that followed.

As the years went on, one of the things that I kept in mind was that these couples were required to be there!   They had to attend the Pre-Cana day as part of their marriage prep - so to their minds, they were sacrificing a Saturday to meet a requirement.  Regardless of how lovely the room, or entertaining the speakers, or delicious the food, this was still a mandatory event. And speaking to a room full of people who HAVE to be there as opposed to WANT to be there is an entirely different thing.

It also became clearer to me, as years went on, that I was not playing a "home game."  These were not necessarily well-catechized young Catholics who desired to live a devout Catholic lifestyle - and in fact many of the couples included Protestant and even atheists, as well as Catholic who were not living their Catholic faith. A bit of hostility started showing itself in the evaluations the couples wrote for us every year.

Now, I'm not a stranger to apologetics, and I like a good debate very much! But this was different. It was more like baring my soul in front of a room full of strangers, not really knowing who was really on "my side" or not. Then when the evaluations came in AFTER they had all gone home, there wasn't even a chance to respond to what was written. I think that was the hardest part for me.

Still there were times when I could look into the crowd and see that I was touching someone's heart, and quite a few times one of the young women would come up to me and thank me for giving the talk.

In 2007, Mr. Pete started attending a convention that was important for his business, and I had to give the talk by myself.  That was pretty tough to do with all of my other "single mom" responsibilities of taking care of a toddler, kids, pre-teens, and high school swimmer. In 2008 I had to go solo too!

Mr. Pete was able to join me for a few years but was gone last year, and, as it turns out, the dates of the convention and Pre-Cana were destined to clash again this year. I was dreading the idea of giving "our" Pre-Cana talk by myself alone again.  Then my sister asked me to go with her to a breakfast that day.  When I told her that I couldn't because of my Pre-Cana talk she said that maybe, just maybe, because of my age and appearance that it would be better for a younger person to start giving this presentation.

In a logical world, it seems to me that the Pre-Cana couples should be hearing about marriage from a widow or widower with 50+ years of marriage experience, who could speak of what it was like to truly live the full sacrament of marriage from the wedding day until death.  It seems like when you undertake a monumental vocation like marriage, it would be awesome to hear from someone who actually lived that life successfully and is willing to pass on all that experience and knowledge.

But that's not our culture, and when I thought about it, my sister is probably right. These young couples are about the ages of my older children - the same older children who have eschewed my values to live a life we actually talk against in our "marriage as a sacrament" talk!  And the more I thought about it, who am I to give this talk to strangers, when I haven't even been able to convince my own children?

On more reflection it seemed that the original goals I had for our Pre-Cana ministry were no longer being met.  Mr. Pete and I weren't doing it together: he was going to be gone to his professional convention at least half of the time. The sharing of the more personal parts of our marriage had become more difficult to share with these young strangers who were going to get a chance to critique and criticize me without a chance for rebuttal. The thought of facing that again, especially by myself, was a little scary. And I wasn't really sure that we were helping Catholic couples to start out in a Catholic marriage and, although I am sure we touched a few hearts and minds over the years, I was no longer sure that this was the best or most effective way to go about it, at least for me.

So I resigned.  Mr. Pete is planning for his convention and he was more than okay with it.  It's probably time for another couple to step up and make the Marriage as a Sacrament Speech their own.

I enjoyed the times that we were able to do it and I loved the public speaking experience for the most part.  I just hope that the Lord leads me into a ministry where I can be the most effective, and hopefully, something my husband and I can do together.