What's not to love about a man who's not only a Catholic Techie and avid reader, but also sports a cool hat in a teacup? 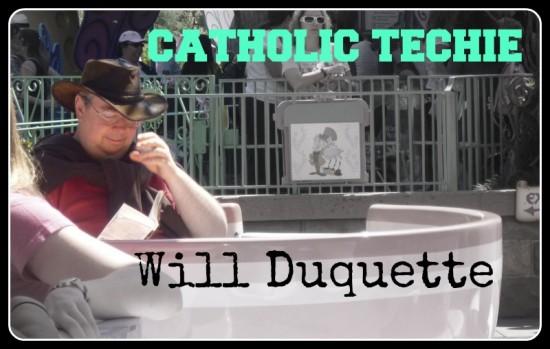 Meet Will Duquette, who, in response to my request for a picture to go with this interview, sent me this picture.

He not only loves his tech, folks, but also his books and, yes, his family. Of course, I'm operating on the assumption that he didn't just choose to sit in a pink teacup by choice. I could be wrong.

You know Will already: he's been teaching us about the pillars of Dominican life for the last few months in his column here at CatholicMom.com. He's also a blogger at Cry "Woof"!, and you'll find that a delightful stop and a place for wisdom and chuckles and goodness.

Will's a guy who I wished lived down the street from me. (As it is, he's across the country.) I've had the chance to actually hear him converse in person and...it's wonderful. He makes you feel singularly smarter and more curious and he makes points that stretch your mind. Having met Will and spent a weekend at a conference with him makes me want to meet his wife and his kids, because surely they must be as interesting as him.

Will is a storyteller, though I'm not sure he knows it. He's also, as you can tell from the picture above, a reader. He's done some reading on the Forgotten Classics podcast that have transformed my reading. No, really.

I really get a kick out of writing software. It's like taking pure thought and putting it into a structure so that it can do work while I'm not watching. What I do is the closest you can get to being a wizard without invoking dark powers.

My work as a software engineer plays into the New Evangelization only very indirectly: I got started writing on the web back in the 1990's because I wanted to play with HTML.

My return to the Catholic Church in 2007 has led me to spend more time reflecting on my faith; and as a Lay Dominican I can't help wanting to share my reflections on the Gospel with others. As a result I went from being mostly a book blogger to being mostly a Catholic blogger.

Finishing up a complicated design and watching it just work. As I say, it's like magic.

I'm probably reading something on my iPad, quite possibly to my kids.