Go Ahead and Write in Your Books

You know how there are certain people you meet in life that you just find fascinating?  People that you want to be around and get to know all about:  what they’re thinking; where they’re from and what they’ve done; what they currently like to do and where they hope their future’s moving to.

Well, surprise, that person is you!  At least, it will be for your children.  Sometimes it might seem hard to believe, and it may take a long time (as in three or four decades, so don’t hold your breath), but for most of us there comes a time when we want to know our parents better, to understand them, to spend time with them and get to know all about them.

When we’re young, we tend to think of our parents in the only way we see them:  in relation to ourselves.  They are extensions of our own lives, there to care and tend to us, to drive us around, existing (as far as we know) only as satellites in orbit around us.  But as we get older, the day will come when the epiphany strikes and we’ll finally see that our parents are more than accessories to our own lives.  They are their own people with their own lives.  And right after that thought flashes through our brain, we’re suddenly left with a mystery:  just who are these people?  Surely they must have their own dreams and aspirations, hopes and worries, prayers and plans, just like we do, but we don’t know what they are.  Our parents have usually been for us like Mary is in the Gospels:  people who keep all these things, pondering them in the silence of their hearts.

But a time comes when children want to know these things about their parents, when children hunger to know their parents as real people, to be with them, to spend time with them, to hear them speak and really listen to them.  After my paternal grandmother died, my parents went through her old calendars.  She always wrote little notes on her calendars, things like:  “John and Beth came over today with the kids” or “Jane was born.”  Just a line jotted here, a comment there, but it was something of her, a connection to her, and my parents drank it up, going through all of her old calendars from years past and wishing there were more.

There was something similar after my maternal grandmother died.  She had a recipe book which her mother-in-law to-be had given her back in the 30’s, when she first got engaged to Grandpa.  The last few pages of the recipe book were blank, and Grandma used them to make notes of major life events:  births, deaths, the start of World War II, when Gandpa got assigned to a munitions plant in a distant state.  After Grandma died, her children made copies of the recipe book so that all the kids could have one. 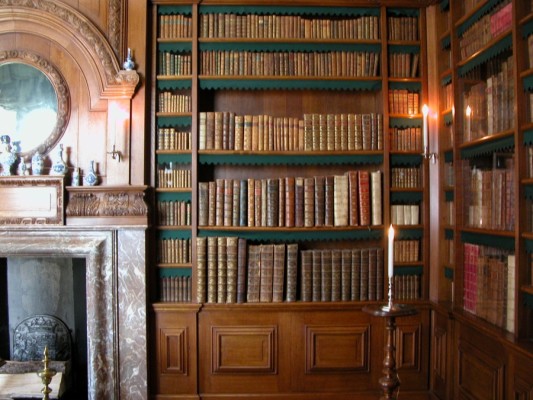 My own mom heard a great idea somewhere that she passed on to me.  She knows that I read the Bible every day, just 10 or 15 minutes of Scripture in the morning to start the day, and Mom suggested:  “You should write the date in the margins as you begin reading the Bible each morning, and write a few lines about what’s going on in your life.”

Mom’s ideas really struck me, because I remember many years ago running across a book by Charleton Heston that was made up of entries like that which he had made in his daily calendar.  Heston got in the habit of writing a few notes in his calendar each day about what was happening in his life, and reading them all piled up together it was surprising how effective they were at conveying a picture of his life.

With the Bible, Mom suggested I could take it a step further and make notes about reflections and thoughts prompted by Scripture—chronicling the interaction and conversation with the Sacred Word.

“Think about it,” Mom said.  “You would end up with a Bible full of little notes about what was happening in your life, and your kids’ lives, along with your dreams and hopes and all the thoughts on life that your Bible reading would draw out.”

And since I read the Bible every day, over the years I could “journalize” a Bible for each of the kids.  “Wouldn’t that be a treasure for them someday?”  Mom asked.  “Wouldn’t you love to have something like that?”

Actually Mom, now that you mention it, I would.  Ahem.

It’s a brilliant idea, with a low entry barrier for those already in the habit of regular spiritual reading.  My mom isn’t a “Bible before breakfast” person, but I know she has a regular rotation of devotionals she reads every day.  Devotionals, the Bible, Divine Office—anything like that would work to create a family heirloom, of the self and of faith, for our kids.

So I told Mom I would start “journalizing” Bibles for my kids.  Who knows, a “journalized Bible” could even end up encouraging kids in the faith someday, maybe getting them to start reading the Bible at some point in the future if they’ve fallen out of the habit or never developed it in the first place, even if at first they only open the cover to see the notes left by their parents.

So I’ll start.  And I’ll also send my mom a nice pen to keep by her side when she does her daily devotional reading, because she’s right:  I would treasure something like that someday.