When Calls the Heart - “Lost and Found” Movie Review 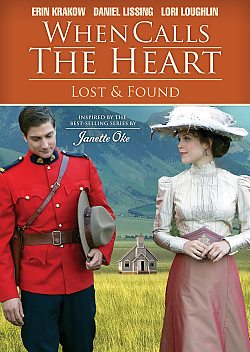 When Calls the Heart - “Lost and Found” is a feature length film from the first two episodes of the When Calls the Heart television series on the Hallmark Channel. The DVD was released on February 25th. It is produced and directed by Michael Landon Jr. and inspired by the best-selling book series by Janette Oke. The movie tells the tale of Elizabeth Thatcher (Erin Krakow), a high society young teacher, who moves to a small town called Coal Valley in the west. After a massive mine explosion, the women of the town are widowed and Elizabeth is left with the challenge of educating the mourning children. Elizabeth stays with Abigail Stanton (Lori Loughlin), who lost her husband and son in the mine explosion, and she also meets Constable Jack Thornton (Daniel Lissing), who believes her wealthy father posted him in Coal Valley to watch over her.

The widows of the town need help when they receive letters forcing them to leave their homes. The women struggle to work in the mines, the very place that killed their husbands, in order to keep their houses for the sake of their children. Elizabeth and her students try to find a way around the law. When unforeseen events test their faith even further, the women of the town, including Elizabeth, must pull together to keep their homes and hearts intact.

The female characters in the film stand strong when they decide to take matters into their own hands and work in the mines. The other women of the town help the widows by delivering homemade food. Woman's gift of relationships is what brings the town together in order to recoup after the tragedy. As the men in charge of the town try to start over with new miners, the women are not afraid to protect their homes. They take on the challenge fully knowing the dangers that they face.

The faith of the characters in themselves and the other townspeople shows they must have faith in God. After the mine explosion, they take responsibility and care for the people who are still in their lives. Christian values such as, hospitality, community, and love are displayed through the actions of the characters.

The ending of the film is left open-ended since the series continues after this first DVD. When Calls the Heart is a film with romance and drama, and it will keep most audiences engaged. The story is wholesome, touching, and something the whole family can enjoy. It is well-filmed and accurate to the times it is portraying. I look forward to the next part of Elizabeth's journey. God may ask us to do things we wouldn't expect of ourselves. These homemakers put on dirty clothes and pick up tools when they are called. Would you do the same for your family?

Order When Calls the Heart - “Lost and Found" and support CatholicMom.com with your purchase