How Far We Have Come Thanks to My Picture Missal

Editor's Note: Today we welcome David & Mercedes Rizzo back for a guest post about their daughter Danielle, who has autism and is non-verbal, and their faith journey with her.

We just returned from Church amazed at how attentive and reverent our daughter Danielle is during Mass.  Today, when the time came for the Consecration, Danielle showed us her picture missal and pointed emphatically to the “Kneel” icon.  We were sitting on the bench along the back wall of the church  and not in our usual pew so the closest kneelers were about three feet away from us.  Yet Danielle knew it was important to kneel for the Consecration and continued to communicate this to us by pointing to her picture missal.  We smiled at each other and with Danielle walked to the nearest kneeler. Danielle smiled and folded her hands in prayer.

Danielle is fifteen years old and non-verbal due to autism. When she was younger we wanted her to learn about God and our Catholic faith.  We were confident on a certain level that this was possible, but we were not really sure how it would all turn out because of the severity of her disabilities.  In fact we were more than a little scared when we began the process of religious formation.

So when we see how far she has come, the simple gesture of pointing to the picture missal to remind us of the need to kneel is a breakthrough moment for us. A simple gesture, yes; a breakthrough moment, absolutely!  One that we might never have experienced if we had not moved forward with Danielle’s religious education in spite of our fears that she would be too disruptive during Mass or unable to understand.

We want to share this good news with other parents of children with special needs who may be debating whether or not to take their child to Church or begin a religious education program.  We want to assure them that with perseverance and support good things are possible.

The picture missal that Danielle uses is published by Loyola Press.  Each page has two picture icons.

The first picture shows the position of her body whether she should stand, sit, or kneel.

The second picture shows what is happening on the altar.  This allows her to know what is expected of her and where she should pay attention.

When we first started out we used a home- made version of this with laminated picture icons, index cards and a two ring small binder.  In those days, we had to help her follow along with prompts and even assist turning the pages.

Now she holds the missal herself and turns the pages at the appropriate time  with an occasional gestural prompt from one of us.  Repetition, reinforcement, simple praise and behavioral strategies all played an important part in Danielle’s success. 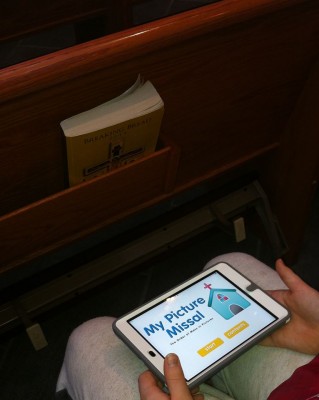 Recently, “My Picture Missal” was released as an app for iPads.  We are looking forward to trying it out.  We know that Danielle will have continued success  in the faith.

David and Mercedes Rizzo have been married more than 20 years, and are the parents of four children: Brendan, Colin, Danielle, and Shannon. Their daughter Danielle has autism and is non-verbal.  During her sacramental preparation, the lack of religious education resources available to children with severe disabilities inspired David and Mercedes, with the help of their son Brendan, to create the Adaptive Eucharist Preparation Kit.  They have contributed to the Adaptive Reconciliation Kit and the Adaptive Confirmation Kit.  Together they have provided material for various blogs including Catechist Journey, DRE Connect, and CatholicMom.com.

David is a physical therapist who has worked extensively with children and adults with disabilities.  He is the author of Faith, Family, and Children with Special Needs. He has presented at the Los Angeles Religious Education Congress, the National Catholic Partnership on Disability Annual Conference, the Mid-Atlantic Religious Education Congress, and the National Catholic Catechetical League Annual Conference.  Additionally, David has contributed to the Finding God series (Loyola Press).

Mercedes is a certified teacher who has provided support to children with individualized education plans.  She has worked in both public and parochial schools.