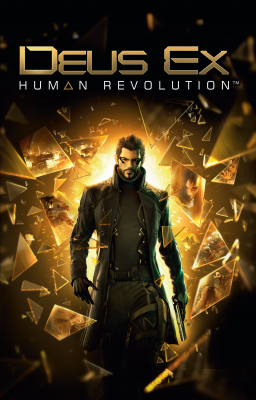 First person, stealth action, role-playing game... yes, that is a lot to digest.

Set in the near-future of 2027, ex-cop Adam Jensen works for Sarif Industries, a Detroit-based biotechnology firm that deals in augmenting human beings -- standard cyborg improvements in human beings. Think of them as(sometimes) voluntary prosthetics with an attitude. After Sarif is attacked, Jensen's girlfriend is murdered, and Jensen himself is left for dead, he is rebuilt with the latest in augmentation, and he is the only person who can unravel the mystery of those who are trying to destroy him, Sarif, and every augmented human being in the world.

Yes, a Detroit cop is left for dead and rebuilt by a huge corporation — someone was watching Robocop.

To start with, the game is in first person, an RPG a little like Elder Scrolls: Oblivion, only in a scifi setting. However, many of the set-piece battles require more stealth than fighting. Imagine the stealth action of Splinter Cell, only lacking the same mechanical finesse.  However, you have the option to either kill or disable your opponents -- except for boss fights (Unless you're playing the Director's Cut edition). Like with many first person shooters, there is regenerating health, a cover mechanic, and modifiable weapons.

Much of the running around in the game consists of talking to people.  After all, this is an RPG. It has a conversation system reminiscent of Mass Effect, and some of the decisions you make impact the game play.  There are some segments that are very forgiving, with no penalty for choosing poorly ... and then there are dialogue segments that are so punishing and unforgiving, you will be pounded for it.

The action segments are varied by Jensen's augments, giving him superpower-like abilities. These include hacking skills, cloaking abilities, lifting heavy objects, and other modifications to improve stealth, shooting, jumping, etc.  For the record, the most useful skills to upgrade include hacking, strength, jumping, and falling (so you can fall from heights without dying).

When playing, the gamer has to be careful.  Going through a police station, knocking out various and sundry opponents, was relatively easy ... fighting off three hoods in an alley? Oy, not fun. And, of course, the fight in the police station went great --until I got to the main floor, and was gunned down repeatedly. Then I said to heck with it, left the building, came in the front door, and talked my way past the desk sergeant, and I literally walked in.

The graphics are a bit of a pain at times.  Don't get me wrong, the cut scenes are beautifully rendered, in HD quality ... and then there are the interactive dialogue portions, where the lip sync is atrocious.  If you get the more expensive Directors Cut, this might be better.

The music is okay, but doesn't blow my socks off.

Okay, the morals are, like with Mass Effect, up to the player. However, this is one game where the M rating is perfectly appropriate. Yes, the dialogue is occasionally peppered with four-lettered words, but that isn't the worst part.  No, there is no nudity, but even without the language issue, the M-rating holds.

Why? The world itself is very dark. For example, running through Shanghai, I accidentally ran into a "love hotel," and came across an argument between an employee and her employer, where they fought over "augmenting" her and her fellow employees.  No, not those kind of augments, but cybernetic implants what would be "for the client's enjoyment." The mission that results is for Jensen to save a "fellow employee" who has been kidnapped so she could be forcibly augmented.

As I said, really dark.

Does it have replayablity ? Sure. Is it addictive? No. Why? The "normal" setting, here called "Give me a challenge," can be brutal. Repeated deaths can get on one's nerves. You are more likely to see someone throw down the remote control than get hooked on it.

Thankfully, you can hit save almost anywhere in the entire game, so I was able to save right before I dove head first into a dangerous situation.

There are one or two moments where it's still glitching, with missing or skipped dialogue -- strange for a game that came out in 2011 and is fully patched. I've read that the Director's Cut version of this game has better graphics, options for a lower mortality rate, etc, so some of these problems are probably reduced.

I enjoyed this game, and I'd recommend it to adult gamers who have played stealth and first person shooter games.  The ending, I think, needed some work — it focused exclusively on how the final choice affected the world, but there is no follow up on Jensen himself, or how any of the other choices made during the game impacted the world.

Now, don't get me wrong, it was a fun world to play in, and once I got the hang of it, it was even more enjoyable. But it would be good if you had the patience for brutal stealth games, a tolerance for opposition that can occasionally crush you, and you don't mind a world that can get very, very dark.