A Tatting of Green 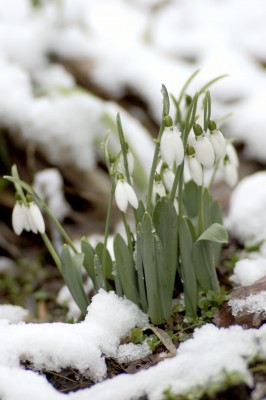 I’m not fond of mud season, but this year I look to it with eager anticipation—it’s been a long oppressive winter. The snow, ice, record lows, and lack of sunlight stretched most of us to our limit. We all have had enough. Over the course of a week I watched the snow cover and banks recede. I hoped that, just maybe, there wouldn’t be another winter storm. But it is only mid-March and winters have held their place well into April. When accumulations of snow are over twelve inches, the soil and the organisms within it are protected from changes in air temperature and prevented from freezing. Beneath the snow in unfrozen earth roots continue to grow. They develop as they seek water, expanding incrementally. Solid frameworks of roots are important when dormancy breaks. For now, it is the time of dirty snow. When all the accumulated dirt scooped up in the plowing and shoveling condenses on the melt. Most winters bring a period of warmth, as in the January thaw, when the crud of winter reconnects with the earth. This winter—I live in central Michigan—the thaw didn’t come until the week before St. Patrick’s Day. With so much dirt in the snow banks, along the drive were mounds of mini-glacial till. Soon enough I would shovel the till for the gardens. I wonder if there is a hidden purposefulness for the grime at the end of winter. The dirtiness creates a longing for what is fresh and clean. The darkness of days, the inactivity of our lives, the dingy greens and dulled browns can make a person ache for new growth, for life affirming change. There are moments in life when dirt accumulates between the flurries of prayers. Times when religion lies dormant and I am unexpectedly rude, or as Elizabeth Scalia had written, failed to see The Holy in others. In the melting away of coldness in the heart, my grime becomes apparent. But dormancy always breaks, spring always comes. There at the edge of the melt, a tatting of green, new life beyond the thaw. Read more reflections and prayers by Margaret Rose Realy, Obl OSB, at Morning Rose Prayer Garden, on Patheos Catholic channel. Copyright 2014 Margaret Rose Realy