First Person Shooters have a long history of the nameless, faceless, voiceless, personality-less protagonist, who is constantly being sent on missions by talking heads who know what's going on, but almost never tell you anything -- it's a formula made fun of in Bioshock (a video game I may never review here), and best used by the Halo francise.

Crysis 2 continues this age-old tradition, only with a few tweaks on the formula.  Crysis has not been reviewed here because, well, it's a PC game that requires more graphics and memory than my computer has. 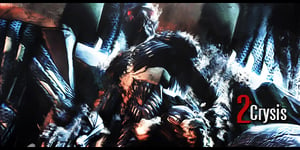 "Something" is up in New York City, necessitating the HALO drop of Marines into town to see what's going on.  It turns out that "Something" is an alien invasion.  The plane is shot down, and the lone survivor, call-sign Alcatraz, is saved by a protagonist of the previous Crysis, who is also dying.

To keep him alive, Alcatraz is given a specialized nanosuit that's a few steps lower than Tony Stark's Iron Man suit.  If that weren't enough, Alcatraz has the suit's previous owners after him, so he has both an alien invasion as well as the cliche private military contractor out to kill him.

Your super suit has a few standard powers -- invincibility, invisibility, and enhanced vision -- all of which are temporary, until the battery runs out and needs to recharge. The power button is a right bumper, and the sprint button is to push down on the left stick as you're running (which is particularly annoying).

The game's opening cut scene reels you in with the promise of the ultimate parkour experience, and it doesn't deliver. You'll spend most of this game crouched on the ground, cloaked, ducking in and out of cover.

These are the selling points of the game, in both music and graphics.  The graphics are beautiful. The streets look like I'm fighting in my home town -- the street signs, the building, all of them are identifiable.  And this provided for the best ride on the FDR expressway I've ever had (in a tank).

And the music? The game was scored by Hans Zimmer, who scored all three Christopher Nolan Batman films.  The music was AWESOME.  I'm actually considering buying this soundtrack.

Unfortunately ... so much money was spent on these elements, it may not have been invested in the rest of the game.

The morals here are all very black and white. The people trying to kill you are all evil. The aliens are even more evil.

As for the appropriateness ... this is simply for adults.  For a moment, ignore the gratuitous profanity and four-letter words used so often you'd think it was a teenager who had discovered an amazing new word. When the aliens release a lethal plague, we go through decontamination areas that are literally stacked with filled body bags. As a New Yorker, I'm not exactly thrilled to see my city trashed. Again. I was there the last few times my city was turned into a war zone.

Oh, and in order for our hero Alcatraz to get his nifty new nanosuit, the previous owner has to commit suicide.  That's right, our completely disposable opening hero (the leftover from the last game, mentioned above) puts a gun to his head and pulls the trigger.  Nice, huh?  It's supposed to be "fine" because the character was already dying, and in order to keep Alcatraz alive, the other fellow had to die. But, still, that's the opening sequence after the credits. Cheerful, huh?

None. Seriously, none.  It might be worth a few replays, but I can't imagine why anyone would.  The player can't affect any change on this game or the world.  The player can leave a trail of bodies behind, if they like, but it's far too difficult to bother. I spent more time sneaking around because I didn't feel like being continuously slaughtered by the opposition.

In game speak, this is a corridor shooter -- linear, scripted, and if leave the trail the developers want you to follow and you will die.  There are even segments when the game will tell you when you can't fight the opposition. For a game with superpowers, I didn't feel very super.

This is not a recommended game. Some of the controls are awkward; it's a first person shooter that will punish you for shooting; the plot is soup-thin; the characters are caricatures, and my four years in an all-male Catholic high school had less profanity-laden dialogue than this game.

Oh, and did I mention adversaries that merely absorb bullets until they simply fall down?

But on the other hand, the graphics are awesome, and are so great that there are few cut scenes in the entire game (two, I believe).

At the end of the day, I didn't mind this game, and it didn't anger me anywhere near as much as, say, Assassin's Creed did.  If you've got a few extra dollars in your pocket, you could do worse than Crysis 2 ... though I'd sooner recommend Bayonetta (Yes, despite the suggestive and mature dialogue, it would be easier to skip the foul language in Bayonetta's cut scenes; and it is, all told, the better game), or a Batman Arkham game, or a lego game, or .... almost anything else reviewed thus far, really.

My Rating: I suspect that if I had paid more than $10 for this game, I would be more upset with it. As it stands right now, I'll give it a 6/10, meaning that it's a good/okay game. The plot is average (perhaps subpar), but made up for by the beautiful graphics and gripping music. But I wouldn't let your kids near it.