David Calvillo sat inside his van shaking. It was a  Thursday evening, September 2008, in McAllen, TX.  He was in the church parking lot about to leave for the Benedictine Monastery of the Good Shepherd where an ACTS retreat was about to begin (ACTS: Adoration, Community, Theology, and Service). David did not feel he needed anything more than church on Sundays. It was his concerned friends and family who had insisted he attend this retreat.

One only needed to look at David—all the weight he had lost and the strain in his face—to see that he was not okay.  Even he knew that he was not okay, but David feared that going to this retreat would not help; it could even hurt.  His family was falling apart. David and his wife Valerie planned to divorce.  This would be his second divorce.  Soon, he and Valerie, his two children from the previous marriage, and the three they had together, would split apart. How would leaving for the weekend do anything to fix their problems?

Less than six years earlier, it was practically love at first sight when David laid eyes on Valerie, a beautiful, dark-eyed beauty who walked into a Boys and Girls Club fundraiser.  He was the club treasurer and it turned out that Valerie was the daughter of the club’s Executive Director.  David wrangled an introduction from a friend who was talking with Valerie, but after a cordial greeting she had walked away.

The next day, when her mother stopped by David’s law firm to get some checks signed for the Boys and Girls Club, he managed to get Valerie’s phone number.  He called and she accepted a date for coffee. That was in February. By March, they spoke of marriage. In April, David got down on one knee and proposed. They married in November, but only waited that long to appease Valerie’s mother who was concerned they were rushing things.

The wedding was a lavish affair, but they were not married in the Church. David had been divorced for five years and had not yet been granted fthe Declaration of Nullity. He did file the paperwork before marrying Valerie, but with only one tribunal office handling three Dioceses, it would be a long wait. By the time it was granted, David and Valerie had been married for five years and were now talking of divorce.

David looked out the van window and saw his brother and his oldest son.  They came to make sure he actually went into the retreat.  “I knew I had to get out of the van,” he said, “but I wasn’t sure about it.”

David took a deep breath. There was no way to back out. He grabbed his suitcase and left the van. “Lord, grant me the wisdom to harvest from the retreat what you want me to know,” he prayed.

Inside were forty men to serve as helpers to the forty that were participating--a total of eighty men.  Everyone was instructed to turn in their cell phones to avoid distractions.

“I had never been separated from my phone,” David said.  “I hid it and was secretly texting.”  But within the first hour, the sincerity of the leaders’ love for the others had touched him.  “I surrendered my cell phone,” he said.  “I made the decision to be a full participant.”  The transformation had begun.

At dawn the next morning, all eighty men gathered to pray the rosary in abeautiful prayer garden.  Strong male voices rose in unison as a thin mist lifted to greet the day. David felt his spirit lifting with the voices. “I felt outside my body; transcending myself,” he said. “I was suddenly with Mary at the feet of Jesus, praying with everyone who had ever prayed the rosary. I was in union with the whole Body of Christ.”

Tears poured down his face. The rest of the retreat was transforming for him.  God moved from the background of David’s life to the core. And the love of Mary that his mother had tried to pass onto him growing up became his own. “I was reborn,” David said.  “I had always felt suspicious of people who called themselves ‘born again,’ but I know what that means now.

When David returned home less than three full days after leaving, he was a different man. Valerie could see that. The following month, Valerie attended a women’s retreat.  Nothing has ever been the same. The rosary has ushered in healing and helped move God to the center of their relationship.

On the last day of the ACTS retreat, David went to the gift shop looking to buy forty of something to show his heartfelt appreciation to the leaders. The only thing there was forty of was the book, The Secret of the Rosary by St. Louis de Montfort. He counted out forty and bought them.  All forty of the retreat participants signed them to give to the leaders.

But David had miscounted and there was one extra book that he threw in his suitcase.  At home, while going through his retreat information, he came across the book, which he had completely forgotten about. Saint de Montfort’s reflections and insights brought him to a deeper understanding of the rosary and a love for the Blessed Mother, and led to his learning about the “Total Consecration” to Jesus through Mary as a way to fully embrace life in Christ.  “When we submit ourselves to Mary, we are naturally led by her to ‘do whatever He tells’ us,” David explained.

David and Valerie did the thirty-three day preparation together and formally consecrated themselves to Mary on the Feast of the Assumption, August 15, 2009; the same weekend that they had their marriage blessed by the Church.

Later that month, David was invited to serve on the team for an ACTS retreat.  During one of the planning meetings, while the men prayed the rosary, David looked around. “Real men pray the rosary,” he thought to himself. “It’s not just for funerals and old ladies.”  He looked at one of the men--“a scary-looking biker dude.”  The biker usually carried a rosary wrapped around his fist to every meeting.  “Real men pray the rosary,” David thought again looking the rosary wrapped around the fist.

At that moment, the image and words emblazoned David’s imagination as a logo. After the meeting, he could not wait to tell Valerie.  Thus, Real Men Pray the Rosary (RMPTR) was born. It is a non-profit apostolate that promotes praying the Rosary “in the light of Scripture, in harmony with the liturgy, and in the context of our daily lives” A Facebook page was created which now has over 35,000 likes. 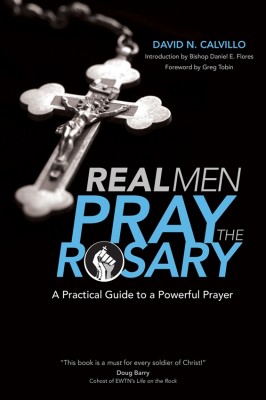 David began giving talks, and then he and Valerie wrote Real Men Pray the Rosary: A Practical Guide to a Powerful Prayer. It includes the history and explanation of the rosary, teachings from popes and saints, personal accounts, Scripture passages, and magisterial teachings. Valerie has a chapter sharing her own renewal, and suggestions for women to support their husbands as the spiritual head of their families.

“I believe that it is through God’s grace that we were able to overcome [our problems] and strengthen our marriage through prayer, and especially by praying the Rosary,” Valerie wrote.   As a busy homeschooling mother (the Calvillo’s have two more children now,) Valerie shared that she often spreads her rosary across the day, praying a decade at a time. “Mary seems to stay with me as I go about my day,” she said. “As I continue through the day I pray a decade at a time, which allows me to reflect more on each Mystery, as I’m making lunch, folding laundry, or driving to the office. I feel as though I’m reaching out to hold Mary’s hand and walk with her, asking her to guide me through the day.”

And since coming to love the Blessed Mother, David said he has come to love his wife more than he imagined possible.  “I did not really understand what true love was before,” he said.  “We were missing something, that third element to cement us together and that was God, through Mary.  Three is not a crowd, it’s what we need.”

RMPTR has launched a 33-day Rosary Challenge encouraging Catholics to pray the Rosary daily for 33 days—one rosary for each year of Jesus’s life. It begins on August 29 and ends on October 1, the month of the rosary.  David said he would love people who take this challenge to share their experiences by posting on Facebook or emailing him at 33days@rmptr.org.