I recently had the privilege of attending a one-day workshop with Sherry Weddell.

Longtime CatholicMom-ers are no doubt familiar with Weddell’s work, Forming Intentional Disciples. Last summer, CatholicMom readers participated in a multi-week study of this book that is wildly sweeping the catechetical nation. 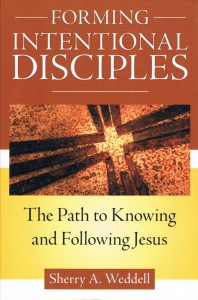 The statistics on Catholic belief presented in the book are alarming, and even more alarming in person!

One in particular hit me right between the eyes and got me thinking about the implications of Forming Intentional Disciples for Catholic parents and families.

According to Weddell, only 48% of Catholics think it’s possible to have a personal relationship with God. Just 60% believe in a personal God, and among 20-something Catholics, that number is 40%.

Even if they did believe, perhaps it wouldn’t matter because 62% of Catholics have indicated they seldom or never share their faith.

There’s a culture in Catholic parishes of “Don’t Ask, Don’t Tell,” Weddell shared. You don’t ask about faith. That’s private. And you certainly don’t tell others about yours. That wouldn’t be humble.

Sherry calls it the Spiral of Silence. Catholics quickly pick up that it’s unacceptable to talk openly about faith, so no one does. That keeps everyone in the parish comfortable, but it puts a huge damper on evangelization.

The other thing she said that hit me was Catholics don’t speak the name of Jesus. It’s like they’re embarrassed to say it. Sherry said in many Catholic parishes Jesus is like Voldemort…”he who must not be named.”

If everyone’s silent, how’s it going to change?

My point? It’s at the heart of our Christian faith that God is personal.

In fact, he’s a Father and we’re made like him. We’re persons because he’s a person. To come to our rescue, he sent his Son to die for us so we could share his life in a loving relationship, an intimate communion.

This is essential to Christian faith and I want the kids of my parish to know it. I want your kids to know it! But where are they going to get it if no one’s talking about it or teaching it?

At the workshop, Weddell called for changing this culture of Catholic silence. She offered three tasks for “breaking the silence.”

I think this is extremely important work for parents. In all likelihood, your children won’t get this in the parish. It might have to come from you, their parents.

1. Teach your children to have a personal relationship with God.

A large number of Catholics don’t even believe in a personal God. In young adults it’s the majority. That’s a huge part of the problem. How can there even be a possibility of relationship when God’s not a person?

It’s on us to educate our children in this fundamental truth.

And really, you’ll have to do this with them. You can’t just tell them about it. You have to show them. It’s something borne out in your nighttime prayers, reading the Gospels together, family devotions, family adoration, and a number of other ways.

I’ve noticed this one myself. In homilies and teaching, Catholics tend to talk about the Church, the Sacraments, Saints, popes, Church documents and councils, but rarely speak directly about Jesus. I do it too. It’s almost like we’re embarrassed by the name of Jesus!

Sherry says Jesus Christ is not just another topic that Catholics should believe in. He’s not simply one more doctrine in the host of doctrines we’re supposed to know about. He’s the center.

If all we do is talk about the Church and it’s trappings without acknowledging Jesus as the wellspring of all of it, “we communicate an institutional, rather than personal, faith,” Weddell says. Institutional faith is what most Catholics have now and it won’t sustain the trails of Christian life. A personal faith is the key to relationship and spiritual growth.

3. Ask about their relationship with God.

Talk to your children about their experience of God and Jesus. Then really listen. Perhaps, like so many others, they’ve never considered the possibility of talking and relating with him.

However, you may be surprised. Children have a large capacity for God. They need to be taught to love God, but it comes very easily to them. My younger son has a very sophisticated prayer life that I’ve only recently learned about. He picked up the basics from the family, but he’s developed it beyond that on his own.

Try sharing your own faith history with your children at the appropriate time. Tell them why you’re Christian, what you believe, and why you believe it. If you didn’t believe at some point tell them about that too and why you switched.

I heard from a father recently did that with his kids. They are grown now and have strong faith lives. He credited this openness about his own faith as an essential factor.

Do you have it to give?

The last thing is probably where this all begins for you. Do you have a personal relationship with God? You can’t give it to your children if you don’t have it yourself.

This concept was pretty foreign to me growing up Catholic. Also, during my reconversion, I was told to pray the rosary and Divine Mercy, go to Mass, go to confession, and go to adoration, but no one ever advised me to develop a personal relationship with God. That’s what Protestants do.

I never considered it until later when I went to Franciscan where it was a large part of the culture. And, as I came to find out, it’s traditionally a large part of Catholic spirituality as well. A personal, loving union with Jesus through prayer is everything in Carmelite spirituality. They just don’t call it a personal relationship.

So, maybe this calls for a bit of reflection and development in your own spiritual life, but I think it’s well worth it. Catholics need to break this culture of silence about Jesus and a personal relationship with him. I believe a great place to start is within the family.

What is your lived relationship with Jesus? Do you believe in a personal God? Have you ever considered the possibility? What would this look like for your family?