Captain America and God of All The Things

We were already running late for Mass.

Everyone was getting buckled in. One of my daughters was already pulling off her shoes and someone was crying that her seat belt was too tight when my son urgently yelled, "Wait! Captain America is still inside!” 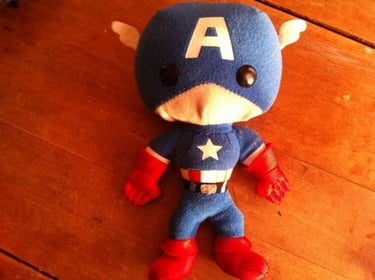 It had been such a good morning for him so far; he, who normally balks at putting on dress clothes, had gotten himself ready in record time and even combed his hair and brushed his teeth without being asked. He was sitting in the car, ready to go before anyone else was.

Captain America is his buddy right now, his constant companion, his lifeline against the anxiety he struggles with so frequently these days.

I had to go back into the house to get him.

My son told me two places where he must be, and I ran (well, as much as someone can who is 24 weeks pregnant) back inside to retrieve him.

Unfortunately, he wasn't in either of the places Sam said he would be.

I hurried into the kitchen, checking his place at the table and under his seat. I searched in the closet where he had put the markers away. I scanned the bathrooms, my bedroom, Sam's closet, under his bed, his sisters' room, under their beds. No Captain America.

He was really lost. I felt lost, too.

I knew if I went back to the car without him, my son would be crushed. I had to find him. Suddenly, I found myself praying.

"Okay, God…and Saint Anthony, I never, ever do this...but if you and Jesus and whoever is available could just help me out for a minute this morning, I have to find Captain America. I have to find him. A little help would be great."

A few minutes later, I glimpsed his bright red boots peeking out above the ladder of my son's loft bed, just visible under a book he'd been reading.

On the way to church, as Sam sat gratefully hugging Captain America, I thought about what it means to pray over something so small. I grew up feeling this practice was silly. One of my mom's friends famously says, "God doesn't want you running to him with every little thing like that," and I had to admit that I kind of agreed with her.

We had a youth minister at one time who prayed over every little thing...I can remember being on youth trips and having him stop the church van as we entered a parking lot to pray over what space he should take for the van..."and God, please just help us to know where you would have us to park today and whose lives we might touch by where we put our van..."

A woman who attended a church where my husband worked used to pray in the grocery store aisle about which brand of bread she should purchase that day. A girl I knew in college prayed about what she should order at meals in the dining hall and where we ought to sit.

I thought it was ridiculous.

Surely God didn't care where we parked, or what kind of bread we bought at the store, or whether we ate pasta or soup for lunch?

As I sat thinking about it on the way to Mass that day, though, I started to feel differently.

Captain America only seemed small. He was, to my son, a line of defense against the anxiety that plagues him. Going to his religious education class at church was going to be easier for him knowing that Captain America was waiting in the car, ready to squish the worry monster of anxiety with his red boots, ready to deflect the flood of negative emotions with his little circle shield.

Maybe it didn't seem like a big deal to anyone else, but to my son, it was a huge deal. And I know that God cares about my son and his feelings even more than I do.

If The Shepherd is going to leave the whole flock to go in search of the one lamb that has wandered away, is it really so hard to believe that God cares where Captain America is hiding? Surely a little boy's Sunday School fears are as important as any of the prayers included in our weekly liturgies.

In the grand scheme of the universe, on the level that we imagine God sees things, it is tempting to think that none of these little things are important enough to bother with prayer. It’s tempting, but it’s wrong. What matters to us matters to God. He didn’t just create us to give Him glory, but to be in relationship with Him. He wants us to talk to him about all the things that burden us, whether parking spaces or bread.

Or even Captain America.

What do you think? What are some ways we can involve God in the small details of our lives? Or should we save our prayers for the bigger issues we face?