The Answer to the Problem of Death: Reflection for Easter Sunday

Readings for April 20, 2014: The Resurrection of the Lord, The Mass of Easter Sunday 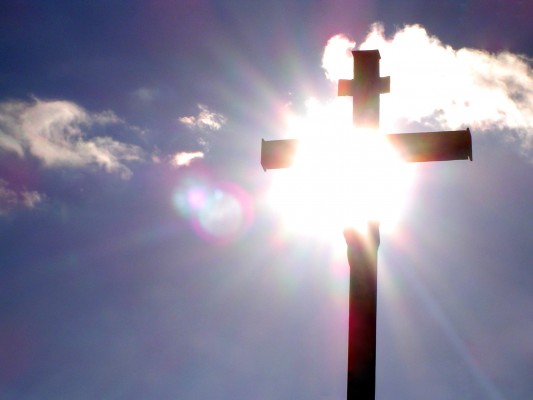 The serpent’s bite was a deadly one.  The venom had worked its way deep into the heart of the entire human race, doing its gruesome work.  The anti-venom was unavailable until He appeared.  One drop was all that was needed, so potent was this antidote.  Yet it was not like Him to be stingy.  He poured out all he had, down to the last drop.  The sacrifice of His entire life, poured out at the foot of the cross – This was the Son’s answer to the Problem of Sin.

Three days later came the Father’s answer to the Problem of Death.  It was equally extravagant.  For Jesus was not simply brought back to life like Lazarus.  That would be resuscitation, the return to normal, human life, with all its limitations.  Including death.  Lazarus ultimately had to go through it all again . . . the dying, the grieving family, the burial.

Jesus did not “come back.”  He passed over, passed through.  His resurrection meant that he would no longer be subject to death.  Death, as St. Paul said, would have no more power over him.

You may say that physical death was not the worst consequence of sin, and you’d be right.  Separation from God, spiritual death, is much more fearsome.

But enough with the talk that physical death is beautiful and natural.  It is not.  Our bodies are not motor vehicles driven around by our souls.  We do not junk them when they wear out and buy another one (that’s one  problem with the reincarnation idea).  Rather, are bodies are an essential dimension of who we are.  Our bodies and immortal souls are intimately intertwined, which makes us so different from both angels and animals.  Therefore death separates what God has joined.  So it is natural that we rebel against it and shudder before it.  Even the God-man trembled in the Garden.

So Jesus confronts death head-on, for our sake.  The Roman Easter sequence, a traditional poem/song stretching back into the first millennium, highlights the drama: “Mors et vitae duello, conflixere mirando.  Dux vitae mortuus regnat vivus.” (“Death and life dueled in a marvelous conflict; the Dead Ruler of Life reigns Alive!”)  Gandalf the Grey, who sacrificed himself to take out the Balrog, returns as Gandalf the White (Tolkien heard this sung for many Easters before he wrote The Lord of the Rings).

“He descended into Hell” of the Apostle’s Creed means that Jesus endured the wrenching of body and soul for our sakes and came out the other side endowed with a new, different, glorified humanity.

How does the Bible describe it?  Well, Mary Magdalene did not recognize the Risen Christ at first, until He called her by name.  The disciples on the road to Emmaus didn’t recognize him either.  But doubting Thomas shows us that his wounds were still evident.  And though he could pass through locked doors, he proved he was not a ghost by asking for something to eat.

Paul describes it as a “spiritual body” in I Corinthians 15, which sounds like an oxymoron to me.  But we have to take off our shoes here, realize that we are on holy ground, and that we do not have words adequate to describe the awesome reality of the new humanity he has won for us.

For resurrection is not something that He intends to keep for Himself.  All that He has he shares with us: His Father, His mother, His Spirit, His body, blood, soul, and divinity, and even His risen life.  And we can begin to share in this Life now, experiencing its regenerating power in our souls and even in our bodies.  We have access to it in many wonderful ways, but especially in the Eucharist.  For the body of Christ that we receive is his Risen, glorified body, given to us so that we too might live forever (read John 6:40-65).

Each of us will have to pass through physical death, but not alone.  He will be with us, just as the Father was with Him as He made his perilous passage.  And while we will experience indescribable joy when our souls “see” him face to face, this is not the end of the story.  He will return.  And the resurrection will have its final and ultimate impact.  Joy will be increased still further when he makes our bodies like his own, in glory.  “I look forward to the resurrection of the dead, and the life of the world to come. Amen!”