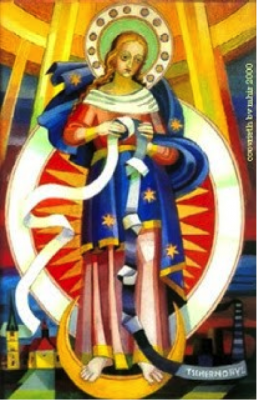 Blessed Anne Catherine Emmerich writes in her diary that God desired to bring about His plan of redemption sooner but began with St. Joachim and St. Anne because, she says, they were the first to love one another as an icon of “Trinitarian love.”

But the“Immaculate Conception”? How is that possible and why was it necessary?

For me, Mary's Immaculate Conception is further proof that God is indeed outside of time and space.  He is pure spirit so He is unaffected by time and space which exists in a physical world.  It is logical that God could take the graces of Calvary and apply it to Mary as her soul was infused into her at the moment she was conceived in St. Anne's womb. He created a perfect vessel, Christ makes all things new and she became the Under of Knots.

We are to be like living tabernacles, to be a monstrance from which Christ radiates to everyone who sees us.  We are to radiate Christ and to be a star of Bethlehem.

I have always desired this and because I am lazy and sinful I look for shortcuts.  I know how my own limitations are what keep me from being able to do these things yet I still desire to embrace this greatness that I have been made for.  That is why Marian Consecration is such a great gift to humanity.

We can learn so much when we contemplate how God’s plan for redemption began with Mary.  Mary was free to choose sin just as Eve was.  So God began with Mary because He was going to untie all of the knots tied by Original Sin. It began in the virginal garden of her womb.  Like Eden, Mary’s garden was without sin or blemish.  Just as Eve was given a choice to love, so too was Mary. Whereas Eve took from the tree of knowledge and closed herself to the will of God, Mary yes began when she "let it be done unto her" and the fruit of all knowledge, the Alpha and Omega was given to her.  Mary’s yes to the Holy Spirit conceived the very life within her that would become the word made flesh and in His sacrifice of love, mankind would be saved from their sins.

Mary is the Undoer of Knots, she is our hope because she was mere creature, and just as we are creature yet she did the will of God.  Mary was no different than Eve was before the fall in that both were immaculate and without sin.  Mary was completely capable of sinning and yet she did not.  Mary is our proof that we can give our yes to God and be transformed, permeated and espoused by the Holy Spirit.

If you desire a double or triple portion of the Holy Spirit, then consecrate yourself to Mary. She opens us wider than we can do on our own because she undoes the knot.  Mary was what God chose to start with when He set the plan of redemption for the world into motion.

He could have dropped Christ naked in the street, He could have chosen to come in flesh in any way He desired. Yet the plan He chose was to undo the knots of the fall way back in the beginning.

When Christ makes All Things New, He makes ALL THINGS NEW.

Mary, I ask that you intercede and show me how to open my heart to love like the Trinity and to help me to open myself in a bigger and more vulnerable way so that the Holy Spirit will find a home in my heart from which to bring life to the world in and through my yes to the Fathers plan. Mary, Undoer of Knots, pray for us.  Amen.