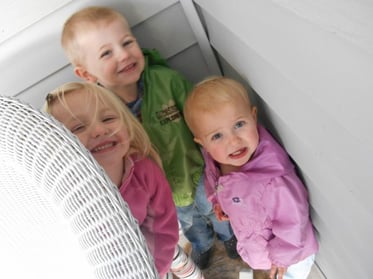 After what seemed like an eternity, we were finally ready to head out on a Saturday adventure. I was excited because it was the first Saturday in a long time that we had no plans: no swimming, no soccer, no dance, and no obligations! It was just a beautiful day for a fun-filled family day trip!

After the kids were all strapped into their car seats, Daddy had to run back in the house for a few minutes. That left the kids and me to say our morning prayers. For as long as I can remember, I have said my prayers once I get in the car. When we lived in Arlington, VA, I had to take four major highways to get to my teaching job in Maryland. I would say a decade of the Rosary immediately...mainly for a safe white-knuckle commute!

I have kept up this habit since I became a mother. Although, I don't start with the Rosary anymore because inevitably I would lose quick count of the Hail Mary’s! Rather, I start with a Morning Offering, a Consecration to Mary prayer for the children and me, and the Guardian Angel prayer (lots of guardian angels watching out for our minivan!).

The prayer to Mary starts like this: O Mary, my Queen and my Mother, I give myself entirely to you. To show my devotion to you, I consecrate to you this day my eyes, my ears, my mouth, my heart, and my whole body. Then it continues...

Long ago, the kids started saying the body parts with me. Occasionally, a nose gets added to the list.

This time, however, something new was added. In true preschool humor, someone added his bum.

Immediate giggles erupted from the car. I instantly lost my train of thought...ER…I would have to start the prayer over. This happens quite frequently! Sometimes I get to the end and I don't even remember saying it, so I say it again then too! And, I was getting aggravated. We’ve been over this so many times before when they get silly at bedtime; prayers are sacred and important so it is NOT the time to fool around.

Listening to my children all sharing a good laugh (even the baby was giggling), I did something that I should not have done!!!!

Not at "bum", of course (I've heard enough potty talk to last a lifetime), but at the laughter in the car which was absolutely contagious. It was just so joyful and it had been much a stressful morning! I’ve learned (and continue to learn) that *sometimes* the best thing to do is to just go with it!

But now, I fear that (at least for a while until they forget), the children will be consecrating their bums to Mary on a daily basis.  I hope she doesn't mind.  In fact, I hope maybe she laughed with us!

I figure there are worse things than a bunch of holy bums walking around Harrisburg, PA :).

The Grace and Mercy of Time
Read
On Giving Thanks to Our Father: Tips from His Tiny Ones
Read
No Time for Exercise? Time to Re-evaluate
Read