Editor's note: Today, I am happy to welcome a guest post from my personal friend and Catholic Relief Services Communications Officer Kim Pozniak. As you read this today, Kim is flying home after having spent the past two weeks with colleagues in the Central African Republic. I ask you to take a look at CRS' updated resources on the ongoing crisis in this region and to join me in prayer for an immediate and lasting end to the violence. LMH 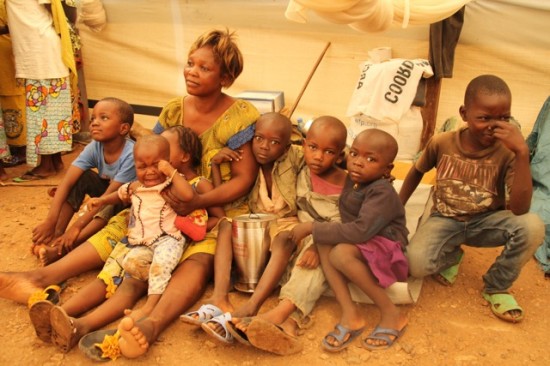 Nathalie Balakadja and her seven children have lived in a displacement camp in Bangui for more than four months. With ongoing violence in CAR, they’re still too afraid to return to their homes.

I almost didn’t hear the woman’s soft voice as I carefully make my way through the large, white tent housing several displaced families at Centre John 23, a parish compound in Bangui, the capital of the Central African Republic. I look down from where the voice had come from and see a woman, wearing a yellow dress and flip flops, sitting on a thin and frayed straw mat. A few moments earlier I had noticed the thick mud clumps that were forming under my shoes, the result of a heavy downpour earlier that morning that turned the ground into several inches of thick mud. Nathalie’s mat is spread out on that mud, some of her seven children sitting around her.

I stop to talk to her, listening to her story of how she and her family had arrived here at the parish on Christmas Day 2013. When armed Seleka rebels went door to door in her neighborhood, accompanied by heavy gunfire, she knew it was time to run. She and her children are now safe at this camp that houses some 1,500 displaced people but they don’t have enough to eat and the moisture from the wet and muddy ground is seeping into their mats and clothes.

Click on the images below to see in full detail.

Hundreds of thousands of people in the Central African Republic have suffered from a conflict that has played out for more than a year. Many outsiders are describing it as religious, but that’s not what I’m hearing here. There are economic and political factors that have pitted communities against each other in horrible acts of violence. And as in so many conflicts, innocent people – women, children, men – are the ones suffering the most. 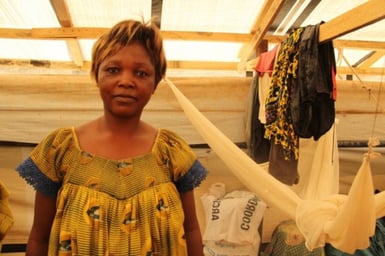 Nathalie Balakadja spoke with Kim Pozniak about life in the Central African Republic.

Nathalie tells me that her life was good before the conflict. She got along well with others in her community, Christians and Muslims. She used to sell cassava to contribute to the family’s income. Now she lives from the assistance provided by Caritas with the support from Catholic Relief Services. She receives rice, sardines and oil, enough to survive. The children spend their days playing with toys crafted from trash and other materials they can salvage but Nathalie wants them to be back in school.

As we speak, I feel a little tug on my sleeve. When I look down, I see one of Nathalie’s children, a little boy no more than five years old. “Do you have anything to eat for me?” he asks in a low voice.

Nathalie’s story is one of thousands of people here in CAR. Muslims and Christians have been forced from their homes, have seen their loved ones killed and their belongings destroyed. They are desperately waiting for security to be established so they can restart their lives.

In the meantime, Nathalie and her children get by with the help of Caritas and the bit of cassava she’s able to sell to others in the camp.

“God gives me strength,” she says, explaining how she’s able face each day with the hope that one of them will be the day that she can return home.