Let God Teach You Through Your Children

Our children come from the heart of God; He knew them in the womb and they knew God. Then at baptism, these little people become one with Christ. As I mothered nine children, I discovered that this sacrament is not simply a meaningless ritual but a powerful encounter which actually transformed my children into spiritual people, albeit little people who could teach me about the nature of God and life in the Spirit. 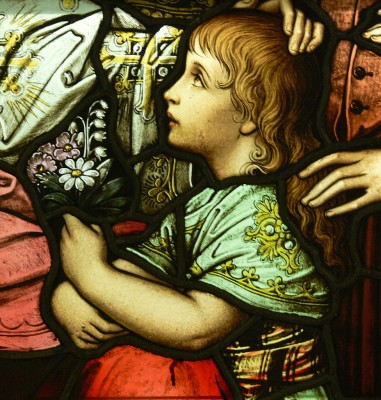 When I started to mother, I was determined to raise committed Catholic Christians and so I tried too hard. I had the mistaken notion that my kids were blank slates and I had to teach them everything. I assumed the role of teacher; I was the resident expert.

God had to shake me out of this arrogant stance by humbling me in the face of my children’s unique, innate spirituality and their pure, open relationship with their heavenly Father and their Mother Mary.

Children are affected by their environment. They absorb values, attitudes, culture, and spirituality. However, their spirituality is not only picked up from their parents. Children’s spirituality is not simply taught, it rises from within their own spirits as they listen to the voice of the Holy Spirit in their own hearts. Often what came out of our children’s mouths surprised and startled us. Yet both my husband and I were often aware of the deep spirituality that flowed from our children to us as well as from us as parents to our offspring.

For example, I was rocking a newborn, one afternoon, while eighteen-month old Jean sat on her dad’s knee, slowly waking up from a long nap. The topic of discussion for the last hour had been,

"How on earth can we manage to get to church as a family with three little ones, all on different schedules?"

Every choice of Mass or church had some complication or difficulty that seemed insurmountable. It seemed an impossible situation and I resigned myself to simply staying at home on Sundays for the time being.

Suddenly, we were both startled as a flushed and distraught three-year-old Matthew came running into the kitchen. He was still groggy from his nap but was able to yell in very loud voice,

No wonder Jesus said, “Unless you become like little children, you cannot enter the kingdom of God.”

We were both stunned into silence. The deep discussion was over. This episode really seems to be a mystery at first glance but perhaps but this was a simple demonstration of the power of God living in all of us, adults as well as little children. As a family we chose to live, move, breathe, and have our very being in Him. He took charge of this particular dilemma by using the most open, articulate member of our family, a three-year-old.

To Ponder: Do I realize that my baby and small child is a spirit-filled Christian, a Child of God?

Lord, bless me with new eyes and ears to see the working of your Spirit in my children's lives. Amen.

Image credit: Stained glass windows in the Mausoleum of the Roman Catholic Cathedral of Our Lady of the Angels, Los Angeles, California; originally created in the 1920s for Saint Vibiana Cathedral, Los Angeles